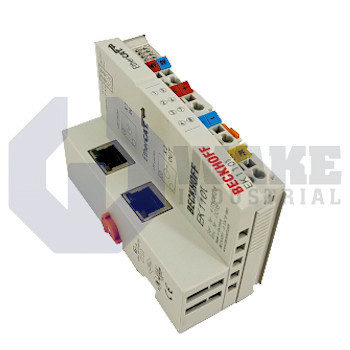 Warranty
1 Year Wake Industrial Warranty Included
Shipping
Worldwide shipping via DHL, UPS, and Fedex
Exchange
Call to find out about our exchange credit for your defective unit.
Sell Us Your Surplus
Have a EK1101 to sell?
Click Here

Beckoff is among the most popular producers of electronic technology for automation applications. With its selection of I/Os, IPC, and motion controllers, the brand has become quickly known as an industry standard for high performance automation applications. Beckhoff Automation has adopted and developed EtherCAT as its standand fieldbus and communication protocols for its products. The EK1101 is an EtherCAT coupler used to connect a Beckhoff I/O station, made by a set of different EtherCAT Terminals, to an external EtherCAT network, to allow the communication with other devices (typically IPCs, PLCs or motion controllers).

The coupler should be connected to the network using the two RJ45 sockets, placed on the left side of the device and to the Beckhoff EtherCAT terminals using the E-bus connection on right end of the module.

The EK1101 module supports the HotConnect EtherCAT procudure, meaning that from a star network topology, some branches can be extended (called HotConnect groups) that can be connected or disconnected even during operation.

On the back of the device there are three rotary switches that are meant to set the ID of the device (that may range from 1 to 65535). The EtherCAT master will read the ID of the device using the process data and, if the master supports HotConnect, the I/O station can be integrated in a dynamic way within the EtherCAT communication and can be placed at any position in the network allowing the operator to easily implement many different topologies. The coupler is also used to provide power to the Terminals connected to the station. The coupler alone is able to provide up to 2000 mA to the station. If the I/Os require more current, additional Power Feed Terminals (e.g: EL9400, EL9401) should be installed in the station.