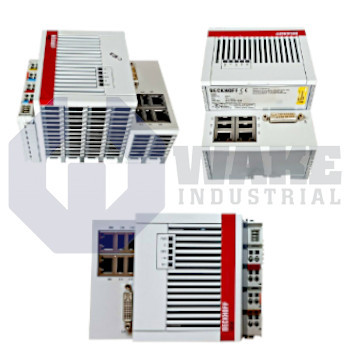 Warranty
1 Year Wake Industrial Warranty Included
Shipping
Worldwide shipping via DHL, UPS, and Fedex
Exchange
Call to find out about our exchange credit for your defective unit.
Sell Us Your Surplus
Have a CX5130-0125 to sell?
Click Here

The CX5130-0125 is a part of the CX5130 series, and features a Windows Embedded Standard 7 P 32 Bit operating system. The CX5130-0125 industrial PC features the Intel Atom® E3827 processor as its main component. The dual-core processor has a speed of 1.75 GHz. The CX5130-0125 Embedded PC has a main memory of 4GB DDR3 RAM and it is not expandable. The PC system features CFast card slot and MicroSD card slot for flash memory, but these cards are not included with the package. One of the main features of the CX5130-0125 PC is its control software. The embedded PC supports TwinCAT 3 runtime (XAR) control software. This control software is meant to implement PLC or motion control with or without visualization. It can also execute motion control applications featuring interpolating axis movements.