EL6910 is an EL6xxx series terminal manufactured by Beckhoff. This terminal weighs approx. 50 g, and operates with a normal cycle time of approx. 1 ms and a current consumption (from E-bus) of typ. 160 mA.
Request a Quote Request Repair 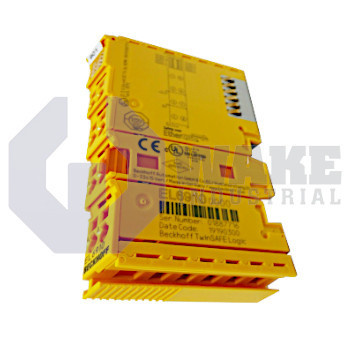 EL6910 is an EL6xxx series terminal manufactured by Beckhoff. This terminal weighs approx. 50 g, and operates with a normal cycle time of approx. 1 ms and a current consumption (from E-bus) of typ. 160 mA.
Request a Quote Request Repair

Warranty
1 Year Wake Industrial Warranty Included
Shipping
Worldwide shipping via DHL, UPS, and Fedex
Exchange
Call to find out about our exchange credit for your defective unit.
Sell Us Your Surplus
Have a EL6910 to sell?
Click Here

Beckhoff Automation Technology is a German company that offers automation software, Fieldbus components, I/O components, Industrial PCs and drive technology worldwide. The EL6910 is a Logic Terminal by Beckhoff meant for establishing connections between TwinSAFE input/output devices. The Logic Terminal has been specifically designed to expand the range of Beckhoff’s Bus Terminal system and to ensure machine safety. The EL6910 EtherCAT terminal is suitable for EK1xxx series Bus Couplers and CX Embedded PCs featuring E-bus connection. Like the older version, the EL6910 terminal features eight LED indicators along with eight connecting points on its front panel.

The EtherCAT terminal measures 12mm x 100mm x 68 mm (W x H x D) and weighs approximately 50 grams. Featuring a cycle time of 1 ms and an error response time under 2ms, the EL6910 logic terminal supports fast and smooth flow of signals between connected devices. The logic terminal has been tested and meets EN standards for vibration/shock resistance and EMC emission. It can be installed in locations ranging between 750hPa and 1100hPa. It can be installed 690 meters below sea-level, up to 2450m above sea-level. The TwinSAFE logic terminal requires 24V DC to operate, has power dissipation of IW, and consumes 160mA current.

The EL6910 TwinSAFE Logic Terminal should be installed along with TwinSAFE I/O devices in a control cabinet with IP54 protection class. It should be mounted alongside bus terminals on a 35mm mounting rail. The control box should be big enough to provide 20mm clearance from either side and 35mm clearance from top and bottom of the terminals. The logic terminal itself offers IP20 class protection and meets international standards in terms of safety and performance.