HNF Series Mains Filter manufactured by Indramat, Bosch, Rexroth. This Mains Filter has a Nominal Current of 94 A along with a Mains Connecting Voltage of Factory Assigned.
Request a Quote Request Repair 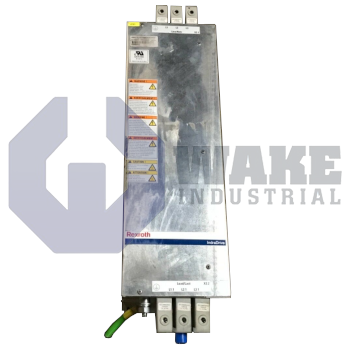 HNF Series Mains Filter manufactured by Indramat, Bosch, Rexroth. This Mains Filter has a Nominal Current of 94 A along with a Mains Connecting Voltage of Factory Assigned.
Request a Quote Request Repair

Warranty
1 Year Wake Industrial Warranty Included
Shipping
Worldwide shipping via DHL, UPS, and Fedex
Exchange
Call to find out about our exchange credit for your defective unit.
Sell Us Your Surplus
Have a HNF01.1A-F240-R0094 to sell?
Click Here

Bosch Rexroth Indramat is an industry-leading supplier of automation and robotics components of a vast array of shapes and sizes. An average system of their design consists of a huge number of sophisticated parts: driver controllers, servo motors, command cards and firmware to operate the driver controller, plug-in modifications, and sometimes more auxiliary equipment. Every one of these devices communicates electronically, generally through a high-tech fiber-optic cable known as SERCOS. Every part of the immense networks one might assemble by taking advantage of the IndraDrive system, however, has one thing in common: it requires power. The raw surge of electrical power transmitted by a standard industrial mains is sufficient to drive these machines, but it is a noisy signal that may produce errors in the sensitive Bosch Rexroth Indramat machinery further downstream.

Precise outputs demand precise inputs, and precision is something that Bosch Rexroth Indramat mechanical networks have in spades. Achieving the best possible output, then, starts with the electrical signals input to your network and that is where the HNF01.1A-F240-R0094 mains power filter finds its place. One HNF01.1A-F240-R0094 is capable of continuously stabilizing the waveforms of 94 amps at up to 480 volts of AC, priming them for being used with maximum efficiency in other machines.

After the power is regulated by the HNF01.1A-F240-R0094 filtration solution, you can expect an uninterrupted, perfectly measured and formed stream of power to flow into the segment of a network or full automation assemblage downstream of the unit. With this neatly manicured inflow of power, your operation can proceed exactly as you programmed it to, with minimal chance for electrical interference, pollution, or fouled data transmission caused thereby.