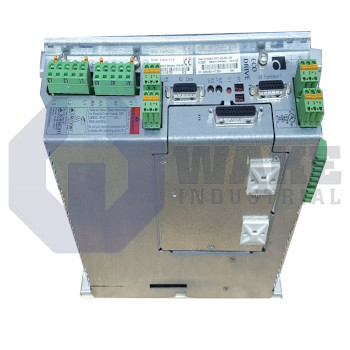 Warranty
1 Year Wake Industrial Warranty Included
Shipping
Worldwide shipping via DHL, UPS, and Fedex
Exchange
Call to find out about our exchange credit for your defective unit.
Sell Us Your Surplus
Have a DKC01.3-016-7-FW to sell?
Click Here

A Bosch Rexroth drive controller, the DKC01.3-016-7-FW pertains to the DKC series of servo amplifier drive controllers. This drive in particular belongs to the Ecodrive Cs family. DKC drives are regarded as belonging to one of three familys, ECODrive type 1, ECODrive type 3 and Ecodrive Cs. EcoDrive Cs range from 750 W down to 100 W. These drives, when compared to other Ecodrive models, have a lower power range.

The drive is enhanced in its usage by suiting systems for both multiple and single axis tasks. DKC drives also offer unrivaled dependability and smooth continuous operation. The user of DKC01.3-016-7-FW drive is able to choose position setting through parallel inputs. DKC01.3-0xx drives use an analog/parallel interface. You can also find diagnostics operating data through these communication interfaces.

The DKC01.3-016-7-FW, offers a wide option of uses includes usage in printing operations and assembly lines. They are also common in packaging machines, handling systems and machine tool applications. The universal abilities that these drives undertake make them leaders throughout the automation industry.