The CLM01.4-P-E-4-B-FW; is a controller from the CLM Controller series manufactured by Bosch Rexroth Indramat. This controller has 4 axes and a control voltage of 24 VDC . It also features a Profibus fieldbus interface for greater efficiency and reliability 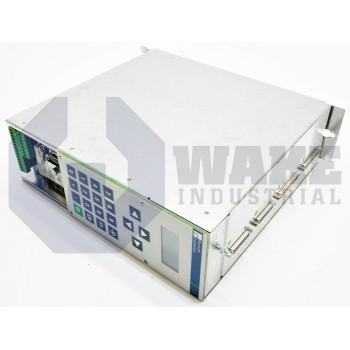 The CLM01.4-P-E-4-B-FW; is a controller from the CLM Controller series manufactured by Bosch Rexroth Indramat. This controller has 4 axes and a control voltage of 24 VDC . It also features a Profibus fieldbus interface for greater efficiency and reliability

Warranty
1 Year Wake Industrial Warranty Included
Shipping
Worldwide shipping via DHL, UPS, and Fedex
Repairs
We offer repair service for the CLM01.4-P-E-4-B-FW in 10 days
Sell Us Your Surplus
Have a CLM01.4-P-E-4-B-FW to sell?
Click Here

The Bosch Rexroth CLM01.4-P-E-4-B-FW is a modular control for flying processing applications. When used in combination with Bosch Rexroth dynamic AC servo drives the CLM01.4-P-E-4-B-FW achieves marked increase in productivity, increased quality through control of velocity, position and acceleration, on-line programmability, and increased security. The CLM01.4-P-E-4-B-FW controls 4 axes and comes with Profibus-DP slave mode interface and expansion with 64 inputs and 32 outputs. As the customer requirements vary from case to case, the firmware for the control system needs to be ordered from Bosch so as to satisfy the particular requirements of each customer. The high current and voltages present in the CLM01.4-P-E-4-B-FW pose a danger to the health of personnel. Therefore, only those trained and qualified for work on high power electrical equipment should be involved in the installation and repair of the control system.

Industry and local safety regulations should be followed during the storage, transport, installation, and commissioning of the CLM01.4-P-E-4-B-FW. The control must be properly grounded before it is put into operation. During service and maintenance, the control system must be switched off for at least five minutes prior to the start of any activity to allow the internal capacitors to discharge completely. The electrical connection points on the CLM01.4-P-E-4-B-FW should not be touched while it is powered on. The guards and covers provided with the control system should be properly installed before it is powered on. Components with live parts and high voltage terminals must be installed in a protective housing. The CLM01.4-P-E-4-B-FW comes with integrated display and keyboard on the front panel which are used for configuration and monitoring. The display uses LCD technology and consists of 4 lines of 16 characters each. The keypad has 20 pressure sensitive keys which can be used for setting display options and for data entry.