The CDB01.1C-PB-NNN-NNN-NNN-NNN-L2-S-NN-FW control unit is manufactured by Bosch Rexroth Indramat. The unit utilizes PROFIBUS as its form of master communication, and it is not equipped with any interface options. 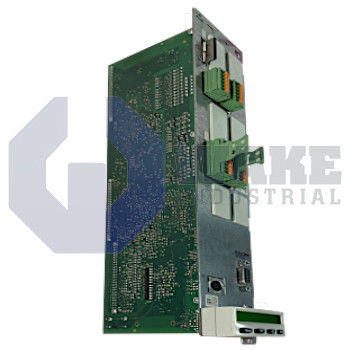 The CDB01.1C-PB-NNN-NNN-NNN-NNN-L2-S-NN-FW control unit is manufactured by Bosch Rexroth Indramat. The unit utilizes PROFIBUS as its form of master communication, and it is not equipped with any interface options.

Bosch Rexroth’s control sections are devices in the Rexroth IndraDrive drive system. They are components of the drive controllers in this system used to control electric motors and monitor their operations. The CDB01 series of devices is a family of double-axis control sections in the drive system with numerous interfaces that aid them to carry out their functions efficiently. Applications of these control systems include food processing and packaging machines, handling and mounting systems, printing and paper processing machines, and machine tools.

The CDB01.1C-PB-NNN-NNN-NNN-NNN-L2-S-NN-FW is a control section model in the CDB01 series of the Rexroth IndraDrive drive system. It is a configurable control section with the Design 1 option, equipped with PROFIBUS. As its master communication module, PROFIBUS allows the control section to communicate with high-level control units. It also permits the cyclical exchange of values such as status signals and diagnostic messages with bus users. Errors of the bus system can easily be detected thanks to LEDs that indicate its network status and other faults or errors that may occur during its operation.

The safety technology option of the CDB01.1C-PB-NNN-NNN-NNN-NNN-L2-S-NN-FW is Safe Torque Off (STO). It is also equipped with a standard control panel that features a single-line display and four keys for its numerous functions. This control panel can be used to set the drive address, establish the position data reference, set the analog outputs, and to start the basic load defaults procedure. The use of firmware is supported with the CDB01.1C-PB-NNN-NNN-NNN-NNN-L2-S-NN-FW, but it has to be ordered as a separate item. It can also be operated remotely using the IndraWorks software package for PC from Bosch Rexroth. This product can be shipped globally with a one year warranty period from Wake Industrial.