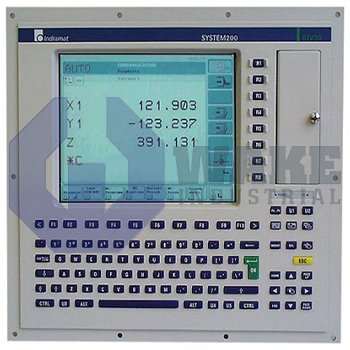 Rexroth Indramat manufactured the BTV30 category of machine control terminals to further provide an easy approach to industrial automation. The exploitation of the precision and high degree of sophistication offered by equipment like the CNC machine is only possible via a highly functional and flexible control interface.

The CFG-BTV30.2C-TC-B1-2D-1C-NN-NN-NN-NN-NN is a type code representing a PC-based machine control panel of the BTV30 category. Based on this type code, this unit is configured according to the following designations: it has a .2C function-type code, which means it is just a regular machine terminal control with a CNC function type. It uses a keyboard interface, as indicated by the ‘TC’ code, and this keyboard is a fully functional ASCII keyboard in the QWERTY layout. This input method allows for flexibility in programming, and familiarity for the user. The rest of the configuration code are suggestions about the modules integrated with this interface.

The function code equally identifies the order in which the modules are arranged for the available slots s3-s10. This terminal is an MTS-P slave with an INTERBUS master module connected to a PC-104 bus, its also has a PLC module (MTS-P01.2-D2) with 2 MB-RAM (Dual) installed in an ISA bus. Finally, and due to the ‘1C’ code, it has a CNC module (MTC-P01.2-M1) with 8 axes and 1 MB-RAM installed in an ISA bus.  The rest of the slots remain unequipped, as indicated by the ‘NN’ type code. Mostly, this unit is like an industrial version of a personal computer with its own processing and storage capacities. It is designed to offer high speed processing via its 300-400MHZ processor, 64-124MB working RAM and a minimum of 3GB HDD storage. Along with a colourful and intuitive display, this control terminal makes automation less daunting.