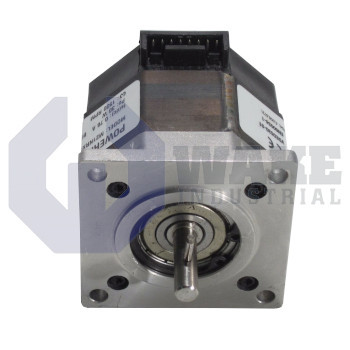 Warranty
1 Year Wake Industrial Warranty Included
Shipping
Worldwide shipping via DHL, UPS, and Fedex
Exchange
Call to find out about our exchange credit for your defective unit.
Sell Us Your Surplus
Have a M21NSXC-LNN-NS-03 to sell?
Click Here

Pacific Scientific, a brand now owned by the automation giant Kollmorgen corporation, led the way in a revolution in motor technology. Their stepper motors, improved by proprietary Sigmax design enhancements, have remained the cream of the electrical crop for decades. Sigmax works by making use of rare earth magnets in conjunction with modified stators on the cutting edge in their field. The end result is, simply put, superior to conventional motor designs. This is exemplified in many cases, such as the POWERPAC II M-series family of motors.

The amperage consumed and numerical value of the torque produced vary with the arrangement of the lead connections, allowing you to customize functionality to suit the ever-changing demands of industry. M21NSXC-LNN-NS-03 stepper motors are equipped with a smooth, single-ended motor shaft. The shaft’s motion can be controlled with the utmost precision due to the inherent advantages of stepper motors: the maximum error on a M21NSXC-LNN-NS-03 movement under no load conditions is only 1.5% of one step in a 200-step single revolution. Manufactured with cost efficiency in mind despite all of their features, the M21NSXC-LNN-NS-03 is an economically and mechanically effective choice for automation ventures.