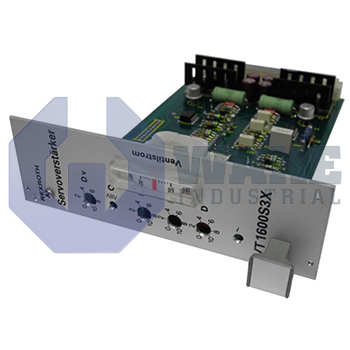 Warranty
1 Year Wake Industrial Warranty Included
Shipping
Worldwide shipping via DHL, UPS, and Fedex
Exchange
Call to find out about our exchange credit for your defective unit.
Sell Us Your Surplus
Have a VT1600 to sell?
Click Here

The VT1600 is a servo amplifier card from Rexroth, Indramat, Bosch from their VT 1600 series as its name suggests. The unit comes factory assigned with a voltage regulator and a power supply of less than 200mA of current.

With this servo amplifier card from Bosch, the end user has the capabilities to control their servo valve without any LVDT (Linear Variable Differential Transformer) feedback. The VT1600 is used for a number of applications, more so closed loop applications.

The output current on this unit is + or – 60 mA to + or – 100mA, there is also the internal control voltage of + or - 2 to 10V. The VT1600 is a 3X series unit with a factory assigned faceplate and a factory assigned voltage regulator. The internal control voltage of the unit is 2 to 10V + or – and the ambient temperature range runs from 34 to 122 degrees Fahrenheit or 0 to 50 degrees Celsius.

The function of this unit is to ensure that the control system can send a command signal which is amplified and transmitted via an electric current to an application’s servo motor. This helps with the production of motion that will be proportional to that of the command signal’s strength. The command signal will represent the velocity that is desired as well as the desired position and also the desired torque.

This automatic device (the servo mechanism) utilizes error-sensitive negative feedback which is used to correct the mechanism’s actions. Typically a servo mechanism will include a position feedback mechanism along with a built-in encoder to ensure the desired output effect. By sending electrical pulses, one can control the servos.