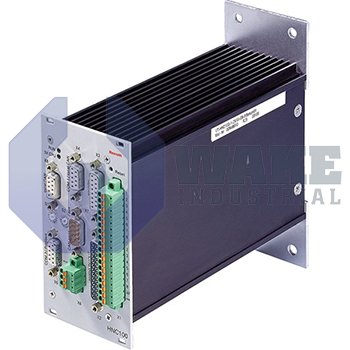 Warranty
1 Year Wake Industrial Warranty Included
Shipping
Worldwide shipping via DHL, UPS, and Fedex
Exchange
Call to find out about our exchange credit for your defective unit.
Sell Us Your Surplus
Have a VT-HNC100-1-22A-W-08-P-0 to sell?
Click Here

Bosch Rexroth designed the VT-HNC100-1-22A-W-08-P-0 in the VT-HNC100 series. The VT-HNC100 digital axis control is among the programmable NC control for about 4 controlled axes. It conforms to particular needs for closed-loop control of hydraulic drives and also provides possible of gaining control over electrical drives. The VT-HNC100-1-22A-W-08-P-0 contains one hydraulic axis, housing for any wall-mounting and an 8 digit inputs/outputs. It also possesses a component series of 22, and it includes a bus connection of PROFIBUS DP. It consists of a superb interface which is attributed to the way it varies and gives free programming which can be integrated and flexible in any control design of choice.

It’s designed to resist shock and vibration as well as reduce interference. It’s durable, built to last and withstand varying climate conditions. Its spectrum of applications and functions is vast; for instance, you can find it in several machine tools, rail-bound vehicles and a host of other pieces of machinery.

1.    It makes use of Local CAN bus for various parameterizing HNC100

2.    The user with a PC can easily programme it

3.    It makes use of an NC program for a sequence of function

4.    It makes use of NC language alongside subprogram methods and conditional jumps.

The Hydraulic Axis comprises of measuring systems, voltage control variable output and controller variants that can be freely configured.

Lastly, its versatility and the wide range of usability make it one of the commonly used among the VT-HNC100 series.