The VCP25.2DVN-003-NN-NN-PW Screen Panel is manufactured by Rexroth Indramat Bosch. This panel has memory of 3MB with A Touch Screen on the front panel. This screen panel is created in design 2, with a Standard interface.
Request a Quote Request Repair 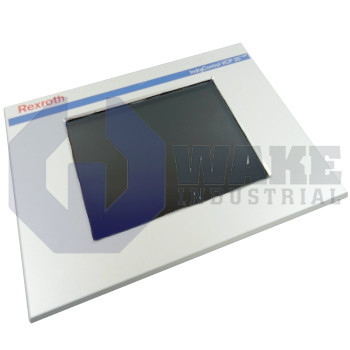 The VCP25.2DVN-003-NN-NN-PW Screen Panel is manufactured by Rexroth Indramat Bosch. This panel has memory of 3MB with A Touch Screen on the front panel. This screen panel is created in design 2, with a Standard interface.
Request a Quote Request Repair

Warranty
1 Year Wake Industrial Warranty Included
Shipping
Worldwide shipping via DHL, UPS, and Fedex
Exchange
Call to find out about our exchange credit for your defective unit.
Sell Us Your Surplus
Have a VCP25.2DVN-003-NN-NN-PW to sell?
Click Here

It comes with a built in battery, which assists in preserving data in and also in supplying the panel’s real-time clock with the much needed power. The VCP25.2DVN-003-NN-NN-PW panel’s battery has a minimum lifetime of 5 years, even in the harshest operating conditions. The battery normally displays change battery message when it runs down—and this happens automatically. However, it is recommended that for the battery in the VCP25.2DVN-003-NN-NN-PW compact operator panel to be changed after every 4 years during the regular maintenances.

When the change battery message is not detected early in time, the data in the panel might be have been lost. Because of this, it’s always recommended to check the data like parameters in the system variables, editable passwords and entries in the message system, and data sets of the recipes after changing the battery. Faulty control of the connected motors can cause dangerous movements of the VCP25.2DVN-003-NN-NN-PW compact operator panel. That’s why it’s important to monitor its components to avoid its faulty operation.