The MSK061C-0600-NN-M1-UP0-NNNN is manufactured by Rexroth Indramat Bosch as part of the MSK Servo Motor Series. It features a continuous torque of 9.0 Nm and a continuous current of 8.7 A. It also displays a maximum torque of 32.0 Nm and a maximum current of 34.7 A with a winding inductive of 6,700 mH.
Request a Quote Request Repair 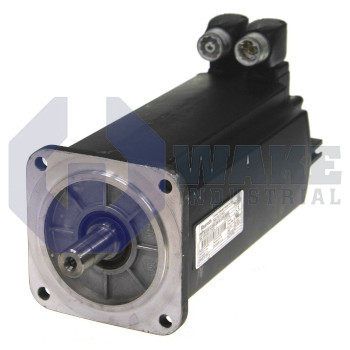 The MSK061C-0600-NN-M1-UP0-NNNN is manufactured by Rexroth Indramat Bosch as part of the MSK Servo Motor Series. It features a continuous torque of 9.0 Nm and a continuous current of 8.7 A. It also displays a maximum torque of 32.0 Nm and a maximum current of 34.7 A with a winding inductive of 6,700 mH.
Request a Quote Request Repair

Warranty
1 Year Wake Industrial Warranty Included
Shipping
Worldwide shipping via DHL, UPS, and Fedex
Exchange
Call to find out about our exchange credit for your defective unit.
Sell Us Your Surplus
Have a MSK061C-0600-NN-M1-UP0-NNNN to sell?
Click Here

The MSK061C-0600-NN-M1-UP0-NNNN was produced by Bosch Rexroth and belongs to the MSK motor series made for industrial automation activities. This motor remains one of the sought-after automation technologies in the world due to its numerous excellent features.

Like some other members of the MSK motor series, the MSK061C-0600-NN-M1-UP0-NNNN features a multi-turn encoder system for accurate motor positioning and speed monitoring. It also features a standardized IP65 protection system that prevents machine damage due to external contacts, foreign objects, and water. For the effective connection of the motor to the main machine, the MSK061C-0600-NN-M1-UP0-NNNN uses shaft with keyway as its output shaft.

Other features of the MSK061C-0600-NN-M1-UP0-NNNN include a maximum torque of 32Nm, a maximum current of 34.7A, technical data regulating temperatures of 60K housing temperature and 100K winding temperature, a natural convection cooling system through which heat is dissipated out of the motor system, and an effective thermal overload monitoring that prevents the motor from unrecoverable damage due to heat.

The MSK061C-0600-NN-M1-UP0-NNNN is no doubt an automation technology of high repute and great usability.