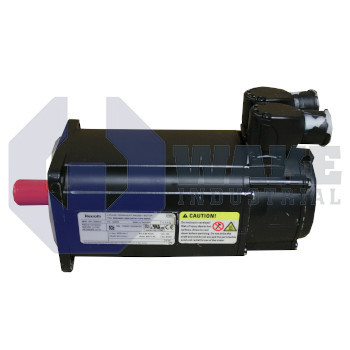 Warranty
1 Year Wake Industrial Warranty Included
Shipping
Worldwide shipping via DHL, UPS, and Fedex
Exchange
Call to find out about our exchange credit for your defective unit.
Sell Us Your Surplus
Have a MSK050C-0600-NN-M1-UP0-NNNN to sell?
Click Here

Rexroth designs the MSK050C-0600-NN-M1-UP0-NNNN as part of the MSK line of servo motors with the latest technology. It was designed to perform a large number of functions and serve various purposes. Some of the features notable with the use of MSK050C-0600-NN-M1-UP0-NNNN servomotors include machine tools, food processing and packaging machines, paper and printing machines and metal forming tools industry.

The MSK050C-0600-NN-M1-UP0-NNNN is designed with an IP65 degree of protection and made with 4 pairs of the pole. It comes with a compact design, produces high torque density, and offers high-level precision. This servo motor doesn’t come with a holding break while the plug is designed to rotate at 240 degree.

Another interesting thing to note about the MSK050C-0600-NN-M1-UG1-NNNN is that it can be used for various other functions aside from the servo drive. It can also be used as the central rotary, kit motors or linear drive. Its new encoder system improves its level of precision which is ranked as one of the highest in the industry.

Ensure that the entire prerequisite is met before installing this servo motor to forestall damage and enhance its effectiveness. It’s also essential that you make use of Rexroth connection cables during installation due to its advantage in terms of capability to carry the extreme load, resistance and UL/CSA authorization.