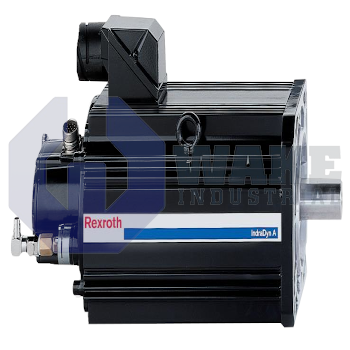 Warranty
1 Year Wake Industrial Warranty Included
Shipping
Worldwide shipping via DHL, UPS, and Fedex
Exchange
Call to find out about our exchange credit for your defective unit.
Sell Us Your Surplus
Have a MSK100D-0300-NN-S1-AP0-NNNN to sell?
Click Here

With the invention of new technologies and innovations, synchronous motors have always been in significant demand and status in the market. As the time passed, different brands originated to produce their motors as efficient and reliable as they can. Bosch Indramat is one the most famous motor producing companies who are specialists in producing high-quality motors.

Bosch has earned a recognized ranking from the beginning not only for motors but also for other electrical devices as well. To classify the extensive range of its motors, Bosch has categorized them in different classes known as series which are known for their own beneficial features.

Talking about its categories or series, MSK is one such series known for its trustworthy performance and outcome. Discussing the MSK category, MSK100D-0300-NN-S1-AP0-NNNN is one of its eminent members known for its distinguishable features. MSK100D-0300-NN-S1-AP0-NNNN is recognized as an AC synchronous motor and it has an optical encoder in it which has single turn hiperface and 128 increments.

MSK100D-0300-NN-S1-AP0-NNNN has no holding brake and is cooled by natural convection. The shaft for this model is plain shaft having a shaft sealing ring.

As the name depicts, it has a motor size of 100 and length of D. These motors have a maximum torque of about 187 Nm which makes them exceptionally good at their performance and giving maximum output. The MSK100D-0300-NN-S1-AP0-NNNN model has no other design.

Motors like the MSK100D-0300-NN-S1-AP0-NNNN have numerous qualities and features make them appear on the top of the list of most economical and efficient motors in the world. Due to this fact, they are widely chosen for industrial applications and other heavy machinery platforms across the world.