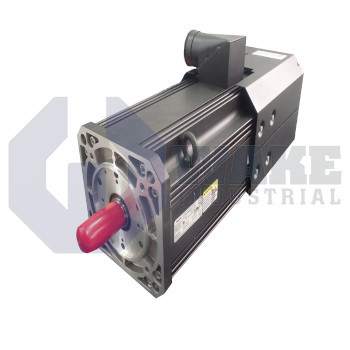 Warranty
1 Year Wake Industrial Warranty Included
Shipping
Worldwide shipping via DHL, UPS, and Fedex
Exchange
Call to find out about our exchange credit for your defective unit.
Sell Us Your Surplus
Have a MSK100C-0300-NN-M1-AP2-NNNN to sell?
Click Here

Machines with logic and motion control capabilities are common these days. Motion controlling modules, like servomotors are very much in demand, and Rexroth Bosch Indramat GmbH are the leading manufacturers of motion controlling solutions. Rexroth Bosch is German-American combo of engineering genius that delivers hi-tech servomotors loaded with superfast motors, sensors and options for upgrades. The MSK100C-0300-NN-M1-AP2-NNNN is yet another model that belongs to the popular MSK Indradyn S series.

The Rexroth Bosch MSK100C-0300-NN-M1-AP2-NNNN servomotor has lots of features on offer that other similar models couldn’t. Starting with the powerful motor's winding, it has a code 300 which indicates that it offers resistance up to 0.30 ohms and its inductivity is 4,200 mH. Low winding resistance helps motor to run speedily and smoothly. When stood still, the MSK100C-0300-NN-M1-AP2-NNNN servomotor by Indramart offers a continuous torque up to 38 Newton-meter at 60K temperature. The feedback encoder system is another noteworthy aspect of the MSK100C-0300-NN-M1-AP2-NNNN synchronous motor. The servomotor features multi-turn optical encoder that offers 128 increments per second. Since, it's a multi-turn encoder, it suits complex positioning requirements and offers absolute positioning up to 4096 motor revolutions.

Among other features, the servomotor features a keyway held shaft instead of plain shaft. And there's a sealing ring as well. Cooling mode of the MSK100C-0300-NN-M1-AP2-NNNN is natural convection, however, there is a fan unit available to install liquid cooling mode. Similarly, there is an option to install the holding brake since MSK100 product line does not feature holding brakes. Finally, the Rexroth Bosch servomotor follows standard design and it is backed by IP67 protection to guard against dust and water. All in all, a handy servomotor that can be easily modified according to the user requirements.