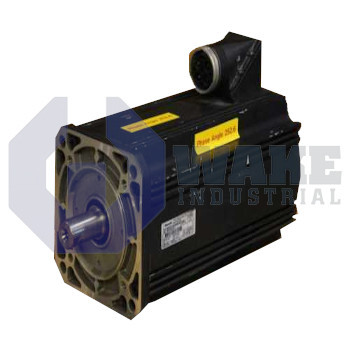 Warranty
1 Year Wake Industrial Warranty Included
Shipping
Worldwide shipping via DHL, UPS, and Fedex
Exchange
Call to find out about our exchange credit for your defective unit.
Sell Us Your Surplus
Have a MSK100C-0200-NN-M1-BG2-NNNN to sell?
Click Here

The MSK100C-0200-NN-M1-BG2-NNNN is an effective electrical motor, being one of the MSK motor series made by the automation technology giant, Bosch Rexroth AG. The motor, with its numerous special attributes, differ from the other members of the motor series.

The MSK100C-0200-NN-M1-BG2-NNNN motor features, as the major tool for recording the position of the motor, an optical multi-turn encoder system that features 128 increment and 4096 mechanical rotations throughput.

The MSK100C-0200-NN-M1-BG2-NNNN motor has many features that are similar to those of other MSK motors and these include its maximum torque of 148.0Nm, maximum current of 79.7A, a system accuracy that is pegged at ± 80 angular seconds, and an holding brake that functions at 72Nm of torque. For its effective attachment to the in-plant equipment, this motor makes use of a plain shaft as an output shaft and bearings.

The internal heat of the motor is regulated through a convection method that is coupled with a thermal management system with the users having the option to use fan units which is an accessory that can be ordered with the motor from the factory. This heat regulation method is further optimized through temperature sensors that is programmed to give warning at 140°C and switch off the motor at 150°C.

The motor uses two temperature models that manage the motor's technical data, and that comprise the 60K housing and 100k winding temperatures. The MSK100C-0200-NN-M1-BG2-NNNN was constructed with an IP65 degree of protection against contact, liquids and dust, and an air sealing connections system can be used for further protection of the motor. Ensure that the load limit is not exceeded so as to preserve the shaft and bearings, as well as the motor from damage.