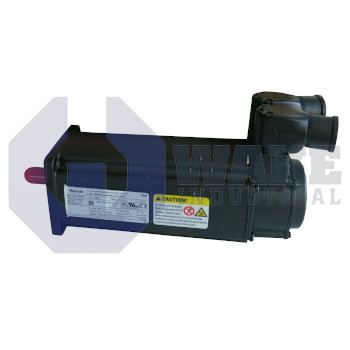 Warranty
1 Year Wake Industrial Warranty Included
Shipping
Worldwide shipping via DHL, UPS, and Fedex
Exchange
Call to find out about our exchange credit for your defective unit.
Sell Us Your Surplus
Have a MSK040C-0600-NN-S1-UP1-NNNN to sell?
Click Here

With a reputation for great quality, exceptional customer satisfaction, and superb performance, Bosch has produced some of the best synchronous motors on the industrial scene today. The MSK series is among them.

The MSK series includes the MSK040C-0600-NN-S1-UP1-NNNN motor. We will now decode its model name and reveal the details of which the name is comprised.

Already we know that the MSK means that it is a part of the MSK series so we can skip to the next three characters. These tell us that the motor size is 040, and the C tells us which motor length group the model falls under. The windings code for MSK040C-0600-NN-S1-UP1-NNNN is 0600.

NN indicates that the model’s cooling type/method is natural convection. The S1 tells us that the encoder for the MSK040C-0600-NN-S1-UP1-NNNN is an optical encoder with singleturn hiperface and 128 signal periods.

The U talks about the model’s electrical connection. This is a connector that is rotatable by 240°. The P tells us that the MSK040C-0600-NN-S1-UP1-NNNN has a shaft with a keyway, acc. to DIN 6885-1 with a shaft sealing ring. The 1 which follows tells us that the model comes with a 4Nm, electrically released holding brake. The last 4 letters let us know that the MSK040C-0600-NN-S1-UP1-NNNN is the standard model.

Bosch has many great synchronous motor series underneath its belt. This is merely one of them.