The DKC06.3-016-7-FW drive controller is manufactured by Bosch Rexroth Indramat. This version 3 unit operates with a 16A type current and its firmware is Sold Separately. 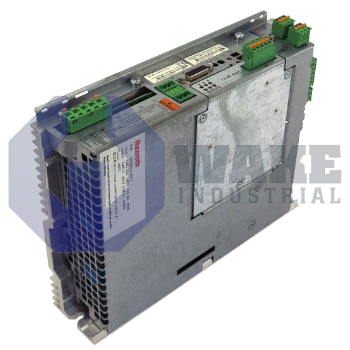 The DKC06.3-016-7-FW drive controller is manufactured by Bosch Rexroth Indramat. This version 3 unit operates with a 16A type current and its firmware is Sold Separately.

Warranty
1 Year Wake Industrial Warranty Included
Shipping
Worldwide shipping via DHL, UPS, and Fedex
Repairs
We offer repair service for the DKC06.3-016-7-FW in 10 days
Sell Us Your Surplus
Have a DKC06.3-016-7-FW to sell?
Click Here

The DKC06.3-016-7-FW is a DKC servo controller which is integrable in the ECODRIVE03 series, since it is a 3rd version drive in its series. Also based on its type code, the DKC06.3-016-7-FW is a series 6 DKC controller with a current rating of 16A. Due to its series type, it has the following interfaces for its connectivity: an analog interface, a DeviceNet interface and the RS232/RS485 interface. The DeviceNet interface is accessible on this drive via the X60 port (male, 5 pins), and it has a maximum bus voltage of 30V.

The DKC06.3-016-7-FW is classified for a voltage category of 7, and it requires a firmware module to be ordered separately with intended specifications for I/O characteristics. Generally, the ECODRIVE03 supports multi-axis motion and combination of multiple DKC drive; the DKC06.3-016-7-FW is also well suited for this kind of synchronization. For electrical parameters, the drive mains require AC voltage in either single or 3-phase connections. This connection could be via a single source supply, group supply without DC bus connection, or central supply. While this servo-drive generates a considerably reduced current, as compared with many other drives within its series, it is well optimized for low-power servo motors that require current inputs within that range. As is common with DKC drives, the DKC06.3-016-7-FW supports encoder inputs and outputs for up to two separate encoders at a time. Depending on the intended application, multiple encoders could improve automation accuracy via a strict closed loop control policy. This product is available from Wake Industrial with a one-year warranty period.