The DKC02.3-040-7-FW drive controller is manufactured by Bosch Rexroth Indramat. This version 3 unit operates with a 40A type current and its firmware is Sold Separately. 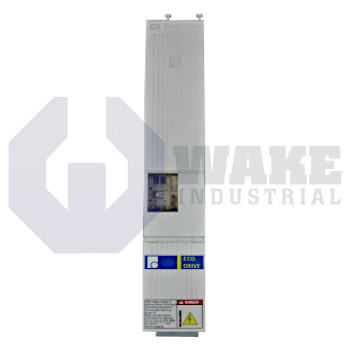 The DKC02.3-040-7-FW drive controller is manufactured by Bosch Rexroth Indramat. This version 3 unit operates with a 40A type current and its firmware is Sold Separately.

Warranty
1 Year Wake Industrial Warranty Included
Shipping
Worldwide shipping via DHL, UPS, and Fedex
Repairs
We offer repair service for the DKC02.3-040-7-FW in 10 days
Sell Us Your Surplus
Have a DKC02.3-040-7-FW to sell?
Click Here

Part of the Indramat DKC series, the DKC02.3-040-7-FW is a digital drive controller produced by Rexroth Bosch. The DKC02.3-040-7-FW drive controller is part of the ECODRIVE03 drive package. ECODRIVE03 is an intelligent automation system with exceptional functionality for both single and multiple axis control tasks. There are multiple variations of ECODRIVE drives including ECODRIVE01, ECODRIVE03 and ECODRIVE Cs. Each drive series also has a different control interface that consists of either Parallel, SERCOS, Profibus, Analog, CANopen or Interbus. ECODRIVE03 firmware makes it possible to run synchronous and asynchronous motors for certain applications.

DKC02.3-040-7-FW is a series 02 version 3 controller. The rated current of the DKC02.3-040-7-FW is 40 A while the DC Bus Nominal voltage is DC 700 V. This specific drive uses the SERCOS interface for its command communication. The firmware on this drive is factory assigned with an unspecified nature. The firmware programming module can be removed and replaced if necessary. The programming module contains both the parameter module and firmware module. The parameter module is used for user-specific parameters while the firmware module is for unit-specific firmware. Unlike some of its DKC counterparts, this specific drive controller does not feature a specific firmware version.

As previously mentioned, the DKC02.3-040-7-FW uses the SERCOS, or Serial Real-time Communications System, interface. The SERCOS interface has two fiber optic connections used to connect to higher-level controllers. This drive controller is perfect for machines with multiple-axis systems such as printers. This product is available from Wake Industrial with a one-year warranty period.