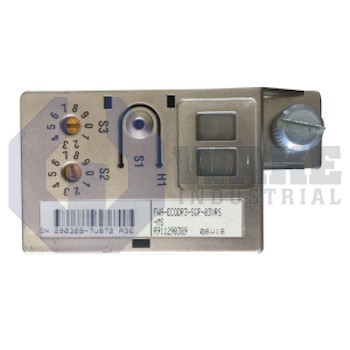 Warranty
1 Year Wake Industrial Warranty Included
Shipping
Worldwide shipping via DHL, UPS, and Fedex
Exchange
Call to find out about our exchange credit for your defective unit.
Sell Us Your Surplus
Have a FWA-ECODR3-SGP-03VRS-MS to sell?
Click Here

The FWA-ECODR3-SGP-03VRS-MS refers to a commercial product code. This product code is known as firmware, which is a combination of hardware and a software program, which is loaded on the hardware drive. This firmware is installed on the motion control drive controls to automate the motion processes in the industries. The FWA-ECODR3-SGP-03VRS-MS is manufactured by Bosch Rexroth Indramat GmBH, which was a Germany based company, which was later acquired by another German giant company known as Robert Bosch GmBH. It is a multinational company operating almost all over the globe.

This is third generation or version product of firmware category, which is used for ECODRIVE03 and DURADRIVE series servo motion controllers or drives manufactured by Rexroth Indramat. The FWA-ECODR3-SGP-03VRS-MS firmware has parallel, analogue, and SERCOS communication interfaces. This firmware is extensively for the general automation application in the food processing, machine tooling, packaging, and other similar kinds of applications.

The FWA-ECODR3-SGP-03VRS-MS is referred to a hardware product category FW, which is specified for the firmware products in the Rexroth Indramat Company. The A after FW denotes the class of the products. This product belongs to machine class. The ECODR3 denotes the name of the product series. This product is designed for the ECODRIVE03 and DURADRIVE servo digital drive controllers. The next SGP in the commercial product name shows that it is the firmware variant used for the general purpose automation solutions. The version of this product is shown by the 03 in the product code. The V in the 03VRS code shows the standard version. The RS in the code refers to the firmware update status. This firmware was updated at the time of delivery. The MS shows the multilingual nature of the firmware.