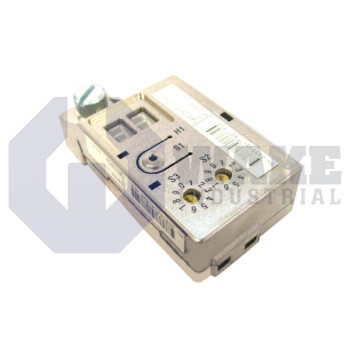 Warranty
1 Year Wake Industrial Warranty Included
Shipping
Worldwide shipping via DHL, UPS, and Fedex
Exchange
Call to find out about our exchange credit for your defective unit.
Sell Us Your Surplus
Have a FWA-ECODR3-FLP-04VRS-MS to sell?
Click Here

The FWA-ECODR3-FLP-04VRS-MS is the commercial ordering code for a firmware manufactured by the Bosch Rexroth Indramat. Rexroth Indramat was an independent business entity before it was acquired and merged as a business unit by Robert Bosch GmBH, a Germany based multinational company. Rexroth Indramat GmBH developed this firmware for different types of ECODRIVE03 family, which includes many types of motion controllers used for the general automation tasks with Field Bus Interfaces.

The FWA-ECODR3-FLP-04VRS-MS item shows that it is a firmware product as indicated by the FW in the product code. The next A in the FWA of the product code denotes the class of the product. It is a machine class. The next ECODR3 shows the name of this product. This product is referred to as ECODR3 firmware because it is used for the different controllers of ECODRIVE03 series. The next FLP shows the type of firmware. This firmware is known as Field Bus Interface firmware. The version of the FWA-ECODR3-FLP-04VRS-MS firmware is shown by the 04 in the commercial code, which means it is the latest version software for this series of firmware. This firmware is version 4 release. The V that stands after the 04 in the commercial code denotes the type of firmware. It is a standard type of firmware denoted by the V. The RS in the item code shows the status of the software update of firmware. This shows that the software was updated at the time of release. The next MS in the commercial code of the firmware shows the language of the product. It is multilingual product. This firmware supports Profibus-DP and Parallel interfaces of communication used in DKC3.3 and DKC 21.3 series of controllers.