The CSH01.1C-NN-EN1-EN2-NNN-L1-S-NN-FW Advanced Control System is manufactured by Bosch Rexroth Indramat. This system is not equipped with a master communication configuration, its primary encoder option is HSF/RSF and it has two analog ouputs. 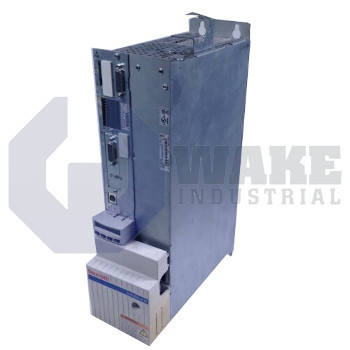 The CSH01.1C-NN-EN1-EN2-NNN-L1-S-NN-FW Advanced Control System is manufactured by Bosch Rexroth Indramat. This system is not equipped with a master communication configuration, its primary encoder option is HSF/RSF and it has two analog ouputs.

Some features are common to all Bosch Rexroth products. They include high efficiency, cost-effectiveness, and user-friendliness. For this reason, they are widely accepted in the drive market and are used for a variety of applications. One of the drive systems by Bosch Rexroth is the Rexroth IndraDrive drive system. It is made up of intelligent units that communicate seamlessly for numerous application advantages. The CSH01 ADVANCED control sections are a group of control sections in this system, characterized by maximum flexibility and performance.

The CSH01.1C-NN-EN1-EN2-NNN-L1-S-NN-FW model of the CSH01 control sections is a configurable control section with the Design 1 build. It is equipped with an Encoder HSF/RSF interface and an Encoder Evaluation Interface with EnDat 2.1 (1 Vpp/TTL). The HSF/RSF interface is designed for encoder systems like the digital servo feedback (for MHD motors) and resolver (for MKD motors). Its safety technology module is starting lockout, which is in line with stop category 0 according to EN 60204-1. Also, with its compact size, mounting, and dismounting, it can be done seamlessly.

A standard control panel on the CSH01.1C-NN-EN1-EN2-NNN-L1-S-NN-FW control section performs a variety of functions such as setting the drive address, setting the analog outputs, starting the basic load defaults mechanism, and accessing the error memory. It has a single-line display on which information like the device’s operating state, command, and pending warnings can be read. With its four keys, the device can be commissioned and its functions explored. It should be noted that this standard control panel is not suited for hot plug and must be plugged in or disconnected only after the drive controller has been switched off.