CML Control Drive is manufactured by Rexroth, Indramat, Bosch. This drive has 8 input terminals and 8 output terminals. The voltage of this drive is 24V dc and the network type is Ethernet. This drive's memory is min 256 MB.
Request a Quote Request Repair 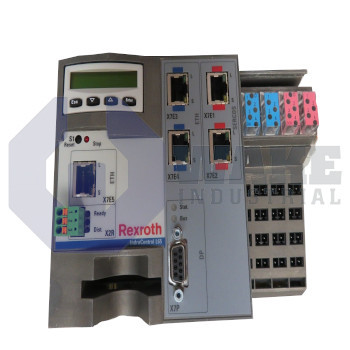 CML Control Drive is manufactured by Rexroth, Indramat, Bosch. This drive has 8 input terminals and 8 output terminals. The voltage of this drive is 24V dc and the network type is Ethernet. This drive's memory is min 256 MB.
Request a Quote Request Repair

Warranty
1 Year Wake Industrial Warranty Included
Shipping
Worldwide shipping via DHL, UPS, and Fedex
Exchange
Call to find out about our exchange credit for your defective unit.
Sell Us Your Surplus
Have a CML65.1-3P-500-NA-NNNN-NW to sell?
Click Here

Bosch Rexroth Corporation is a reputable manufacturer of systems and components for factory automation as well as industrial automation. This corporation offers all control and drive technologies. The IndraControl L65 controls created by this corporation features scalable hardware, unified programming software, large memory, pre-developed functions, reusable code, and built-in connectivity for reducing the engineering time spend by machine builders who work with complex machines. These controls are ideal for printing, machine tools, general automation, and packaging among other industries. The IndraControl L65 controls come with 8 onboard I/O slots which can be expanded up to 512 on more complex machines. With a 1.0 GHz Intel Celeron processor, IndraControl L65 controls are able to provide outstanding performance for applications related to motion-logic.

Rexroth’s CML65.1-3P-500-NA-NNNN-NW IndraControl L65 control has an integrated display for settings as well as diagnostics. This powerful motion controller also features Sercos II as well as a configurable Fieldbus interface. The permissible operating temperature of this IndraControl L65 control range between +5 oC and +55 oC.  According to EN 61131-2, the CML65.1-3P-500-NA-NNNN-NW IndraControl L65 control should be operated in an environment with relative humidity ranging from 5% to 95%. The plug and terminal connections of the components of this control should be checked for possible damage or proper tightness at least once per year. This control unit can be shipped globally with a one-year warranty period from Wake Industrial.