The CLM01.4-N-E-2-B-FW; is a controller from the CLM Controller series manufactured by Bosch Rexroth Indramat. This controller has 4 axes and a control voltage of 24 VDC . It also features a Profibus fieldbus interface for greater efficiency and reliability 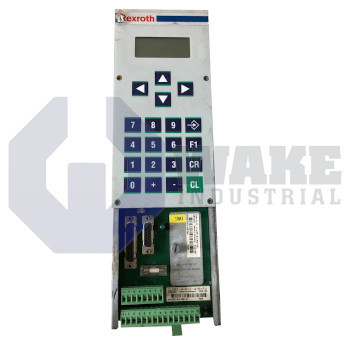 The CLM01.4-N-E-2-B-FW; is a controller from the CLM Controller series manufactured by Bosch Rexroth Indramat. This controller has 4 axes and a control voltage of 24 VDC . It also features a Profibus fieldbus interface for greater efficiency and reliability

Warranty
1 Year Wake Industrial Warranty Included
Shipping
Worldwide shipping via DHL, UPS, and Fedex
Repairs
We offer repair service for the CLM01.4-N-E-2-B-FW in 10 days
Sell Us Your Surplus
Have a CLM01.4-N-E-2-B-FW to sell?
Click Here

The CLM01.4-N-E-2-B-FW is an axis positioning control module with Profibus, featuring four axes and no additional interface equipped. It is on line 1 and design 4, with display design B and input/output expansion E. The control system was manufactured by Bosch Rexroth Indramat and belongs to the CLM series. The CLM01.4-N-E-2-B-FW is modular and compact sized with three operating modes and 4-axis CNC control. It can be applied to or combined with maintenance-free Rexroth Indramat servo drives and offers cost-effective control and drive system. It can be applied to different machines and systems like roll-feed systems, thermoforming machinery, robot devices, wood-processing machinery and more.

The CLM01.4-N-E-2-B-FW features a CTA which has an LCD on its front panel. The display will show four lines with 16 characters in each, and it features a keypad with pressure-sensitive keys which is used to enter and manipulate the data in the program. There are different input keys on the keypad, similar to that of your regular keyboard, like the control keys, data entry keys, navigation keys and F1. There are also different operating modes which include parameter, automatic and manual modes. With the parameter mode, only the parameter input can be displayed on the LCD.

For the standard interface, the CLM01.4-N-E-2-B-FW axis positioning control module features a parallel interface with 18 permanent system outputs and 24 permanent system inputs. All the inputs and outputs that are not permanent are freely programmable. For the fieldbus interface, it uses Profibus. The voltage supply of the CLM01.4-N-E-2-B-FW is at +24 V DC; + 20% although this is dependent on the drive electronics. The dimensions of the control module was designed to correspond with Rexroth Indramat AC controllers which feature a modular design.