The CLM01.3-X-E-4-B-FW; is a controller from the CLM Controller series manufactured by Bosch Rexroth Indramat. This controller contains 3 axes and a control voltage of 24 VDC . It also features 64 inputs and 32 outputs with expansion for greater efficiency and reliability 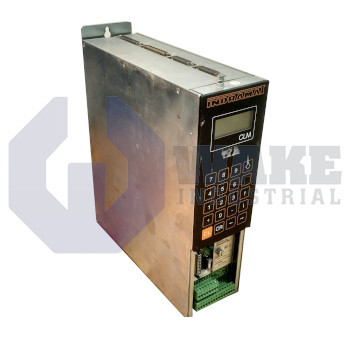 The CLM01.3-X-E-4-B-FW; is a controller from the CLM Controller series manufactured by Bosch Rexroth Indramat. This controller contains 3 axes and a control voltage of 24 VDC . It also features 64 inputs and 32 outputs with expansion for greater efficiency and reliability

Warranty
1 Year Wake Industrial Warranty Included
Shipping
Worldwide shipping via DHL, UPS, and Fedex
Repairs
We offer repair service for the CLM01.3-X-E-4-B-FW in 10 days
Sell Us Your Surplus
Have a CLM01.3-X-E-4-B-FW to sell?
Click Here

The CLM01.3-X-E-4-B-FW axis positioning control module was manufactured by Bosch Rexroth Indramat for the positioning of four-axis system. It is operated by user control and programming. The CLM01.3-X-E-4-B-FW allows for remote operation where it can be controlled by a computer, programmable controller or any other type of customer’s line control. The line control can send commands and receive signals from the CLM01.3-X-E-4-B-FW through the I/O connections. There are up to 24 inputs and 19 outputs. This positioning module is only suitable with software type ‘A’ because it can position four axes, and belongs to the CLM series. It is also on line 1, design 3 and uses a factory assigned firmware.

There are different features of the CLM01.3-X-E-4-B-FW system. It’s important to note that it is parameter-adaptable to different machines and fully self-diagnostic. It’s programming structure and every other part of the system is easy to use and program by the operator. It also features a programmable acceleration rate which is adjusted by the parameter – the same goes for the knee point acceleration. As mentioned before, another feature is its programmable I/O. It allows for axis homing, registration control and synchronization of the control or machine. The front panel of the CLM01.3-X-E-4-B-FW can be mounted separately from the system and it has a display that shows operating codes.

The application program of the CLM01.3-X-E-4-B-FW system can be entered directly through a CLM01.3-A keyboard, and it is defined by the user. It can also be entered through a remote terminal device. It uses an application program flow that is quite similar with a Basic program and consists of three-letter mnemonic commands. It can be applied to different positioning systems in Indramat machines.