The CDB01.1C-PB-ENS-ENS-NNN-MA1-L1-S-NN-FW control unit is manufactured by Bosch Rexroth Indramat. The unit utilizes PROFIBUS as its form of master communication, and it is equipped with the Encoder Indradyn/Hiperface/1 Vpp/TLL interface option. 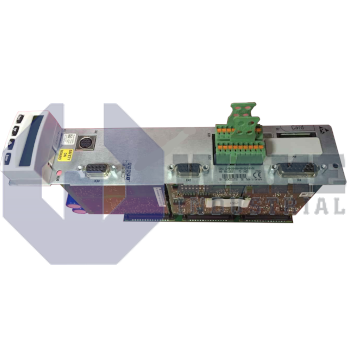 The CDB01.1C-PB-ENS-ENS-NNN-MA1-L1-S-NN-FW control unit is manufactured by Bosch Rexroth Indramat. The unit utilizes PROFIBUS as its form of master communication, and it is equipped with the Encoder Indradyn/Hiperface/1 Vpp/TLL interface option.

The innovative Rexroth IndraDrive drive system designed and manufactured by Bosch Rexroth can solve all kinds of automation needs. It features futuristic components, including synchronous and asynchronous servo motors, converters, inverters, control devices, and other accessories. The CDB01 series consists of compact, double-axis control sections in the BASIC UNIVERSAL control section range. The control sections are found plugged into the power sections of their drive controllers. Their typical applications include food processing and packaging machines, handling, and mounting systems, and printing and paper processing machines.

The CDB01.1C-PB-ENS-ENS-NNN-MA1-L1-S-NN-FW is a control section model by Bosch Rexroth, manufactured as part of the CDB01 series. It is a configurable type that uses PROFIBUS to communicate with other systems and has two standard encoder interfaces. The encoder interfaces support encoder systems, including the encoder system of the MSK series of servo motors, the sin-cos encoder (1 Vpp) with reference track, the 5V-TTL square-wave encoder with reference track, and the sin-cos encoder (1 Vpp) with Hiperface interface. These encoders have a supply voltage of 12V. There is also an Analog I/O extension module on the control section, which gives it analog channels of better resolution.

As a product of category C3 according to IEC 61800‑3, the CDB01.1C-PB-ENS-ENS-NNN-MA1-L1-S-NN-FW is not designed for operation in residential areas as it can cause the development of high-frequency interference in the mains. It has a maximum pulse width of 60ms and a typical inrush current of 6A. With its standard control panel, this control section can be commissioned and navigated for faults. Other functions that the control panel can perform include setting the drive address and the analog outputs. This product can be shipped globally with a one year warranty period from Wake Industrial.