CCD01.1-KE19-01-FW Controller manufactured by Rexroth, Indramat, Bosch. This controller comes with 4 terminals that can house CLC-D02.3M-FW and DEA28.1M and operates with a power consumption of 1 W. 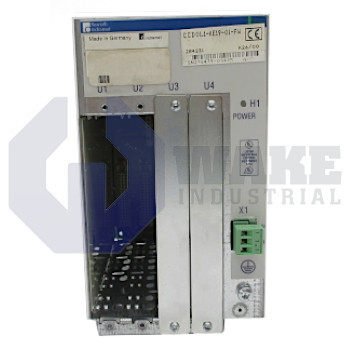 CCD01.1-KE19-01-FW Controller manufactured by Rexroth, Indramat, Bosch. This controller comes with 4 terminals that can house CLC-D02.3M-FW and DEA28.1M and operates with a power consumption of 1 W.

Warranty
1 Year Wake Industrial Warranty Included
Shipping
Worldwide shipping via DHL, UPS, and Fedex
Repairs
We offer repair service for the CCD01.1-KE19-01-FW in 10 days
Sell Us Your Surplus
Have a CCD01.1-KE19-01-FW to sell?
Click Here

The CCD01.1-KE19-01-FW CCD series Bosch Rexroth box terminal is used with the manufacturer’s advanced control section. This product has two connectors for connecting to the control section. It supports cross-communication with the control section using a SERCOS III interface that complies with the IEE 802.3 standards. The RJ 45 type connectors of the device feature eight pins. The pins 4, 5, 7, and 8 of each connector have no functionality. The connections to the box terminal can be established using CAT 5 terminals. The housing of the product offers a shield connection.

The two differential inputs receive RD+ and RD- 10/100 Base-T signals through the interface while the pair of differential outputs transmit the TD+ and TD- 10/100 Base-T signals. The firmware available separately offers the assurance of the proper functioning of the box terminal. The interface is compatible with 10 Base-T and 100 Base-T signals that conforms with IEEE 802.3i and IEEE 802.3u standards in that order. The product also encompasses various LEDs to indicate several statuses. The H1 LED represents the power status, the H10 and H12 LEDs indicate the status of data transmission, and the H11 and H13 LEDs highlight the availability of a network connection.

The yellow LEDs brighten when data transmission is in progress while the green lights get activated when a network connection is readily available. The H1 LED lights up when the box terminal is in operation. The yellow LEDs on top are identified by the names H10 and H12 whereas the green LEDs below are named H11 and H13. The box terminal has a differential input and a differential output on each connector. These inputs and outputs receive and transmit 10/100 Base-T signals. The CCD01.1-KE19-01-FW unit can be shipped to any international destination with a warranty of one year.