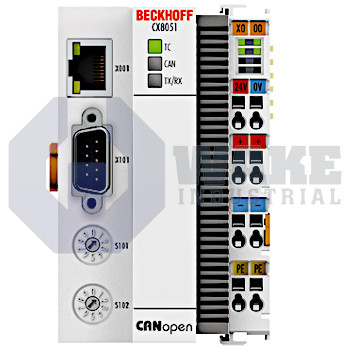 Warranty
1 Year Wake Industrial Warranty Included
Shipping
Worldwide shipping via DHL, UPS, and Fedex
Exchange
Call to find out about our exchange credit for your defective unit.
Sell Us Your Surplus
Have a CX8051 to sell?
Click Here

The CX8051 is part of the larger CX80xx product family of Embedded PCs that are produced by Beckhoff Company. The PC is intended for installation on a DIN rail in a control cabinet. It is used in conjunction with Bus Terminals for recording analog or digital signals from sensors and transferring them to actuators. The CX8051 is to be operated by personnel qualified in control and automation engineering. It can be used as slave devices for higher-level Fieldbus systems or processing PLC programs. It is programmed and commissioned via an Ethernet interface which is used to connect the control system with a normal network. It can be purchased from Wake Industrial with a one-year warranty.

The CX8051 comes with an integrated, capacitive 1-second UPS which comes into play in case of power failure. This ensures that vital data is displayed after the system shuts down. Some of the standard components of the CX8051 include a 512MB MicroSD, an Ethernet interface, Fieldbus interface, a K, or an E-bus interface. This type comes with a CANopen slave interface which enables the PC to offer automatic baud rate detection. Its technical data includes a 32 bit, 400MHz processor, 64 MB RAM internal main memory, and comes with a web-based management feature.

The diagnostics LEDs include power, TC status, and bus status. Other parameters include TwinCAT PLC programming, a maximum of 2A power supply, 3W maximum power loss, and a weight of approximately 180g. The permissible ambient operating temperature is 0 to 55 degrees while the storage temperature is between -25 and 85 degrees. Its protection class is 1P 20 and the relative humidity should not exceed 95%. The interfaces present include a USB device, an Ethernet with RJ45 connector and an RS485 CAN interface.