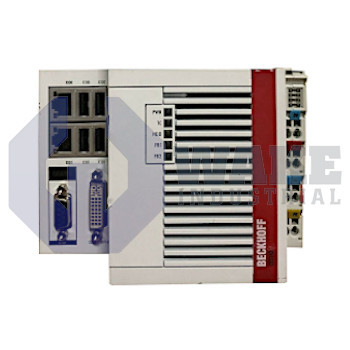 Warranty
1 Year Wake Industrial Warranty Included
Shipping
Worldwide shipping via DHL, UPS, and Fedex
Exchange
Call to find out about our exchange credit for your defective unit.
Sell Us Your Surplus
Have a CX5140-0125 to sell?
Click Here

The field of motion control played a major role during the latter half of the 20th century, when industrialists were moving from conventional equipment to automated systems. From various automation technologies to sophisticated controlling environments designed to manage them, there were numerous innovations that are now adapted worldwide as industry practice. Beckhoff is a German company that excels in the design of automation products such as Embedded PCs, motion control technologies, I/O protocols, and more.

The CX5100 Embedded PC series by Beckhoff is the ultimate range of computer systems meant for automation applications. They are a unique brand of toned-down Industrial PCs that combine desirable computing abilities with PLCs, making them ideal for high-end control systems.

The CX5140-0125 is a top of the line Embedded PC from this range. It is backed by a 1.9 GHz Intel Atom® E3845 quad-core processor and 4 GB DDR3 RAM, rendering it incredibly powerful and fast. Windows Embedded Standard 7 P 32-bit serves as its operating system, which is remarkably easy to use and designed specifically for industrial environments. A variety of connection options are available including two independent Ethernet slots, Gigabit-capable and independent of each other. Four USB 2.0 slots and a DVI-I interface are also part of the package. For I/O interface, users have an option between E-bus and K-bus, either of which are automatically recognized by the PC. Furthermore, this Embedded PC is built for factory environments. It meets the IP20 protection criteria, works perfectly in the temperature range of -25oC-60oC, and weighs a mere 960 g. Finally, its design includes a number of diagnostic LED lights that keep the user informed of its status and makes troubleshooting very easy and less time-consuming.