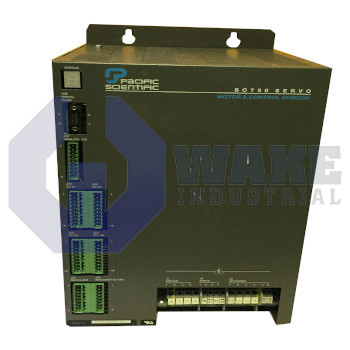 Warranty
1 Year Wake Industrial Warranty Included
Shipping
Worldwide shipping via DHL, UPS, and Fedex
Repairs
We offer repair service for the SC755A-001-01 in 10 days
Sell Us Your Surplus
Have a SC755A-001-01 to sell?
Click Here

SC755A-001-01 is manufactured by Pacific Scientific. This is a single axis servocontroller, known for its high efficiency, functionality and optimum performance. The product is available with a Power Level of 30A cont./60A peak which is along with a 12 bit RDC (+/-22 arcmin, 1024 ppr) Option.

During the functioning of the product, there is BEEP which works as a transmitter. It transmits the beep command to serial port. There is a specific configuration available for a torque block, a program and a specific velocity. All products offered by Pacific Scientific are tested for safety, functionality and performance. Expected to perform as per standard requirements, the device is suitable for long-term usage and in various industrial environments.

It is one of those devices which is created with advanced technology, it is tested to be safe and meant to be used long-term.