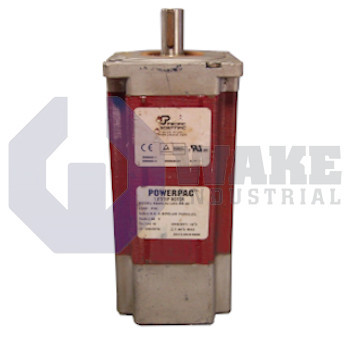 Warranty
1 Year Wake Industrial Warranty Included
Shipping
Worldwide shipping via DHL, UPS, and Fedex
Exchange
Call to find out about our exchange credit for your defective unit.
Sell Us Your Surplus
Have a K33HLHJ-LNK-NS-00 to sell?
Click Here

The K33HLHJ-LNK-NS-00 is designed by Pacific scientific as a K series hybrid stepper. It has a small size which may deceive some users of its immense torque and seamless microstepping. It produces a vast amount of turning force and high acceleration due to its unique rotor design. Its mounting configuration made with high powered NEMA of frame size 34.

It is made with the widely revered Sigmax® technology which guarantees about 25 percent extra torque than what is obtainable in the N series. Also when compared to other series designed by pacific scientific it runs cooler based on its use of same drive parameters. It has a holding torque up to 5700 oz-in (356 lb-in) and a relatively higher torque per frame size compared to other motor steppers in the industry.

The torque performs higher than its rated current which is because of its enhanced torque linearity designed to increase torque capability to the highest. Even at moderate speed, the K33HLHJ-LNK-NS-00 is intended to produce relatively higher torque. It’s rated current and resistance is 8.1 A and 0.52 Ohm respectively per winding.

This micro stepper offers a wide variation of shaft configuration to choose from as well as terminations and unique windings. It comprises of two-phase design with provision for optional mounting of the encoder. It consists of 3 rotor and 4 lead parallel winding leads. The winding type is standard, and rotor type is laminated while the shaft configuration is single key and/or straight key. Lastly, it comprises of class IP 44 Protection.