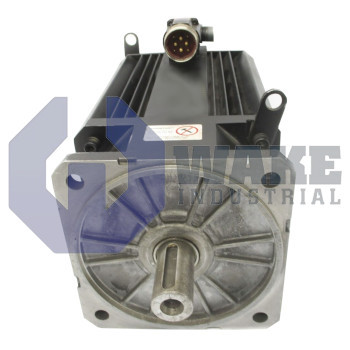 The MSM215-319-304-S-0KA is a 36-kg brushless motor produced by Kollmorgen and intended for use with drive machinery. It usually functions as a part of a controlled motions system that features a transistor-aided electronic amplifier. By design, the MSM215-319-304-S-0KA is not intended for direct linking to thyristor drives. Except stated otherwise, this device is best suited for use in environments where corrosive/excessive moisture and abrupt temperature deviations are inexistent. The rotor moment of inertia of this motor is 0.0108 kgm2 (0.0956 lb-in-s2), and it has a shaft with a keyway that is made from ST-60 material.

The phase-to-phase winding inductance of the MSM215-319-304-S-0KA is rated at 10.6 mH. It has a bolt hole circle or frame size of 215, and its voltage has a value of 460-V. In addition, MSM215 variants are characterized by a thread depth of 28 at their shaft end. It boasts a high-resolution singleturn absolute encoder and has no additional design for this particular variant. The MSM215-319-304-S-0KA is susceptible to EMI or noise that is capable of lowering its performance, especially if stray signals are induced. To this effect, care must be taken to prevent electrically induced noise.