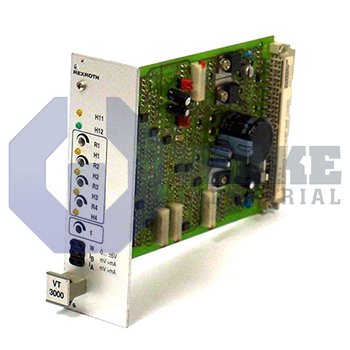 Warranty
1 Year Wake Industrial Warranty Included
Shipping
Worldwide shipping via DHL, UPS, and Fedex
Repairs
We offer repair service for the VT 3000 36 in 10 days
Sell Us Your Surplus
Have a VT 3000 36 to sell?
Click Here

This product comes with various features, including a Series of 36. It also comes with 24 VDC + or - 10 % operating voltage. It has 4 command valves that you can adjust using the potentiometer as well as 4 command value call-ups that are integrated with LED display. The proportional valve amplifier card also features differential input along with a step function generator. Another significant feature integrated is the ramp generator to accelerate or decelerate the pressure rate in terms of signal vs. time.

The VT 3000 36 also comes with polarity protection for the supply of voltage as well as 2 pulsed current output stages. You should keep in mind that when supplied, the proportional valve amplifier cards in the VT-3000 Series have 1 to 5 seconds ramp time. The VT 3000 36 also features a voltage stabilizer to make sure that voltage is consistently supplied. This assures you not only consistent performance but also flawless operations. The card uses PMW output, which provides a differing effect for minimizing hysteresis.