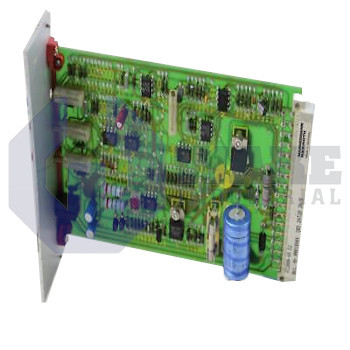 Warranty
1 Year Wake Industrial Warranty Included
Shipping
Worldwide shipping via DHL, UPS, and Fedex
Exchange
Call to find out about our exchange credit for your defective unit.
Sell Us Your Surplus
Have a VT 2000 S 48-E2 to sell?
Click Here

The VT 2000 S 48-E2 is the commercial name of a product manufactured by Rexroth Indramat GmBH, which is a German company and manufactures different types of electrical and electronic equipment and appliances that are extensively used in the motion control solutions or industrial process controls. The company has now been acquired and merged by Robert Bosch GmBH, another giant multinational company based in Germany.

The VT 2000 S 48-E2 commercial code is one of the powerful electronic amplifiers in the product category of VT, which is specified for the proportional pressure controllers. The series of this product is known as VT 200 4X series. The S in the commercial code of this product denotes the card installation and interface. This amplifier controller can be installed in the Euro magazines or Euro cards with 32 pin plugin interface. The 48 in the product code shows the component series. The dimensions for the installation of the component series from 40 to 49 are same. The E2 in the commercial product code shows the English name plate.