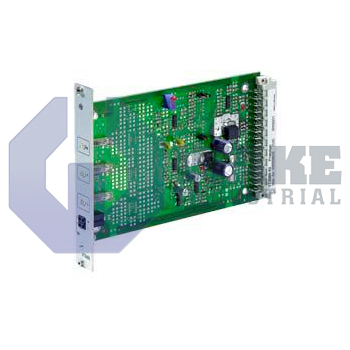 Warranty
1 Year Wake Industrial Warranty Included
Shipping
Worldwide shipping via DHL, UPS, and Fedex
Exchange
Call to find out about our exchange credit for your defective unit.
Sell Us Your Surplus
Have a VT 2000-50 to sell?
Click Here

The VT 2000-50 is designed and manufactured by Bosch Rexroth Indramat. It is a proportional amplifier card in the VT-2000 Series. It is used for controlling single solenoid pressure control valves with no need for electrical feedback. The VT-2000 Series comes with a number of technical specifications that make them stand out from similar products in the market. They feature differential input as well as additional command value input ranging from 0 to +9 V. The proportional amplified cards also have an independently adjustable ramp generator.

The voltage stabilizer ensures that you get voltage consistently for continuous performance.  You also get safe operator control from the integrated potentiometer, which limits the maximum input control command voltage signals. The ramp generator controls the rates of pressure decrease and increase (signal vs. time). The amplifier model 'S' allows you to switch off up and down separately when you desire.  Another benefit of the VT 2000-50 is the pulse width modulated output. It gives a dithering effect to minimize hysteresis and allow for a high range of ambient temperature. The VT-2000 Series are the best proportional amplifier cards.