CML Control Drive is manufactured by Rexroth, Indramat, Bosch. This drive has 8 input terminals and 8 output terminals. The voltage of this drive is 24V dc and the network type is Ethernet. This drive's memory is min 256 MB. 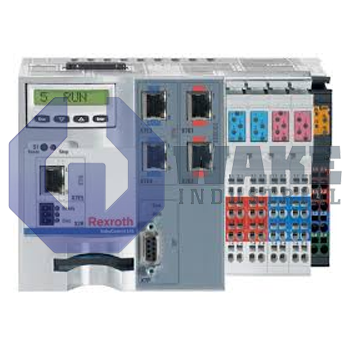 CML Control Drive is manufactured by Rexroth, Indramat, Bosch. This drive has 8 input terminals and 8 output terminals. The voltage of this drive is 24V dc and the network type is Ethernet. This drive's memory is min 256 MB.

The Rexroth CML45.1-3P-504-NA-NNNN-NW is a scalable and modular control which is part of IndraControl L45 product line. The control offers benefits of a standard I/O system with embedded PC architecture. It can be used for PLC and for motion-logic applications including machine tools, printing machines and food processing machines. Integrated interfaces are available on the CML45.1-3P-504-NA-NNNN-NW and optional interfaces can be added via the PCI bus. Processor on the control is an AMD LX800 at 500 MHz clock speed. Amount of DRAM available on the system is 256 MB and the amount of battery-backed SRAM is 8 MB. Non-volatile memory is not available on the system. Integrated communication interfaces include one 10 / 100 Mbps Ethernet interface, one SERCOC interface and one ProfiBus interface. The interface to function modules is Bosch Rexroth PC104 and the interface to I/O terminals is Rexroth line interface. Firmware for the control needs to be ordered separately.

Integrated digital I/O on the system include 8 input and 8 outputs. The CML45.1-3P-504-NA-NNNN-NW weighs approximately 1.8 kilograms. The control housing has an environmental protection rating of IP20. The system comes with a 24 Volts DC power supply with ±5% residual ripple. Maximum and minimum voltage supplied by the power supply are 19.2 Volts DC and 30 volts DC. The system can tolerate -15% to 20% variation in input voltage. Maximum temperature of air surrounding an operation CML45.1-3P-504-NA-NNNN-NW should be between 5 and 55 degrees Celsius. The system does not include a cooling fan. During storage and transportation the ambient temperature should be maintained between -25 and 70 degrees Celsius. Operation of the controller is allowed up to 55 degrees Celsius if the surrounding air is circulating. The control switches off if the internal temperature of the system reaches 80 degrees Celsius. This control unit can be shipped globally with a one-year warranty period from Wake Industrial.