The CDB01.1C-S3-NNN-NNN-NNN-MA1-L2-S-NN-FW control unit is manufactured by Bosch Rexroth Indramat. The unit utilizes SERCOS III as its form of master communication, and it is not equipped with any interface options. 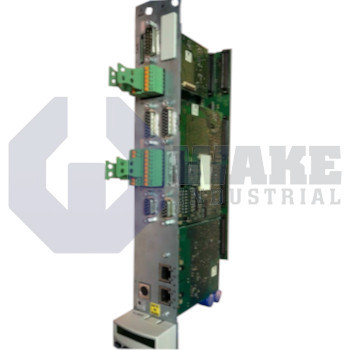 The CDB01.1C-S3-NNN-NNN-NNN-MA1-L2-S-NN-FW control unit is manufactured by Bosch Rexroth Indramat. The unit utilizes SERCOS III as its form of master communication, and it is not equipped with any interface options.

The CDB01.1C-S3-NNN-NNN-NNN-MA1-L2-S-NN-FW is a state-of-the-art industrial control device manufactured by Rexroth Indramat to carry out the accurate control of electrical motors used in industrial production and processing systems. This drive controller is designed by highly trained engineers according to American and European quality standards. Before delivery, this industrial controller is specially tested and certified to operate according to the technical data stated in its documentation; it is also integrated with a special type label that contains important information that can be used to easily identify the controller as soon as it is supplied to the industrial operator. The durable housing unit of this control device offers protection according to the IP20 protection class, which means it can effectively protect the controller from the interference of large solid materials with an external diameter larger than 12 millimeters.

The CDB01.1C-S3-NNN-NNN-NNN-MA1-L2-S-NN-FW industrial control device requires the connection of some additional accessories for operation; some of these accessories include the fiber optic connection, signal level converter for encoder emulation, and an internal universal adapter for safety technology. This product can be shipped globally with a one year warranty period from Wake Industrial.