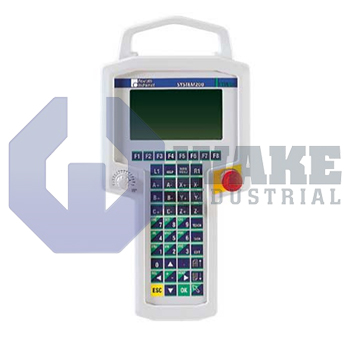 Warranty
1 Year Wake Industrial Warranty Included
Shipping
Worldwide shipping via DHL, UPS, and Fedex
Repairs
We offer repair service for the BTC05.1B-NP2-FW in 10 days
Sell Us Your Surplus
Have a BTC05.1B-NP2-FW to sell?
Click Here

The BTC05.1B-NP2-FW is a control panel is a new-generation device designed by Rexroth Indramat which is one of the top producers of industrial machine components in the world. This particular device is designed to offer industrial operators a single and portable means through which all types of industrial drive controllers manufactured is by Rexroth Indramat can be controlled. The BTC05.1B-NP2-FW control panel is microprocessor controlled, it features a 68000 microprocessor, a 1Mbyte flash, and a 256 Kbyte SRAM which works together to store, manipulate and control the digital information it uses to control an industrial drive controller in the servo system.

The BTC05.1B-NP2-FW industrial control panel is a user-friendly device that can be easily operated by anyone who has been properly trained and has gone through the panel’s documentation. The control panel contains about 48 pressure-sensitive keys which the operator can use to send information into the servo system. Also, the screen of this controller is a liquid crystal display with light-emitting diodes. The resolution of the screen of the control panel is about 240 * 128-pixel graphics. The enclosure of this drive controller is manufactured with polycarbonate, this encloser provides the internal components of the control panel with protection according to the IP65 protection category.

The BTC05.1B-NP2-FW industrial control panel weighs approximately 1.3 kilograms, it is 315 millimeters long, 180 millimeters wide, and about 57 millimeters thick. The controller is sensitive to high temperature thus it should not be operated at a temperature that exceeds +55 degree Celsius, or stored at a temperature that exceeds +70 degree Celsius. The handwheel of the control panel features an internal 6-bit absolute counter. The controller falls under the control category 4 according to EN954-1. This unit can be shipped globally with a one-year warranty period from Wake Industrial.