The ADP164C-B35OA1-BS0H-B2V1 3-Phase Induction motor from Bosch Rexroth Indramat has a Motor Length motor length, Windings type of BS, a Balanced with entire key, without shaft sealing ring Output shaft, and a Design of C35. 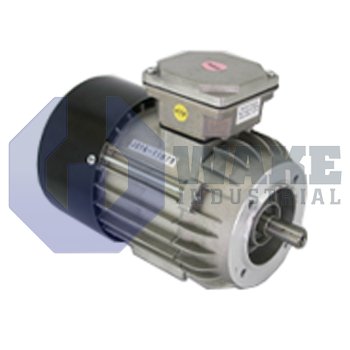 The ADP164C-B35OA1-BS0H-B2V1 3-Phase Induction motor from Bosch Rexroth Indramat has a Motor Length motor length, Windings type of BS, a Balanced with entire key, without shaft sealing ring Output shaft, and a Design of C35.

The Bosch Rexroth ADP164C-B35OA1-BS0H-B2V1 is an advanced ADP series asynchronous motor. It is deployed with digital drive controllers for industrial control applications. The drive controller supplies electrical power to the motor. The digital servo feedback feature on the ADP164C-B35OA1-BS0H-B2V1 motor enables sharing of feedback with the drive controller. The power and feedback are carried via separate cables that terminate on separate connectors on the motor. The location of the motor power connector is on the top side and the output direction of the power connector is on side A of the motor housing. ADP motors feature an axial fan for cooling. The direction of air flow produced by the fan on the ADP164C-B35OA1-BS0H-B2V1 is sucking. The power consumption of the cooling fan is 220 VA and the voltage rating is 400 / 460 Volts AC (three-phase).

The average air volume produced by the cooling fan is 950 m3/hour. The ADP164C-B35OA1-BS0H-B2V1 can be foot mounted or flange mounted. A holding brake is not available on the motor. The motor shaft includes a full key. The motor shaft does not include a sealing ring. The average sound pressure level produced by the motor during operation is 75 dB. The maximum speed at which the shaft on the ADP164C-B35OA1-BS0H-B2V1 can rotate is 6000 RPM. The motor insulation class is F and the protection class is IP65. This rating indicates that the motor is completely dust proof. However the IP24 rated cooling fan is not dustproof. The ADP164C-B35OA1-BS0H-B2V1 should be deployed for applications that are approved by Bosch. Only approved spare parts and accessories should be used. Personnel involved in motor handling and operation should be properly trained and qualified. This unit can be shipped globally with a one-year warranty period from Wake Industrial.