The univeral Eurocard VT-UK2-3X/VT11980A/U257 is manufactured by Bosch Rexroth Indramat. This small and lightweight unit operates with +/- 15 V voltage and 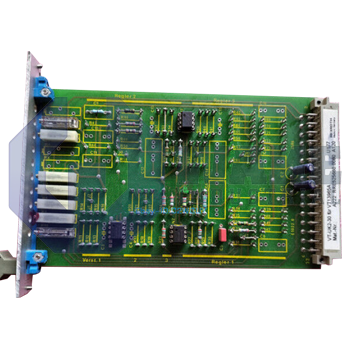 The univeral Eurocard VT-UK2-3X/VT11980A/U257 is manufactured by Bosch Rexroth Indramat. This small and lightweight unit operates with +/- 15 V voltage and

The Bosch Rexroth VT-UK2-3X/VT11980A/U257 is a universal card that you can use to make various operational amplifier circuits. An operational amplifier is a circuit with high input impedance and high gain that you can use to perform mathematical operations on an input signal. The VT-UK2-3X/VT11980A/U257 features five separate potentiometers and three separate operational amplifiers. The function blocks that you can construct with these circuit elements are an inverter, a summator, a regulator, a Schmitt trigger and a differentiator. A regulator is a circuit that ensures a steady constant voltage supply through all operational conditions. It regulates voltage during power fluctuations and variations in loads. A differentiator is a circuit that is designed such that the output of the circuit is approximately directly proportional to the rate of change (the time derivative) of the input.

A true differentiator cannot be physically realized, because it has infinite gain at infinite frequency. A summator circuit is one that sums, or adds, multiple analog voltage signals together. There are two basic varieties of op-amp summer circuits: noninverting and inverting. A Schmitt trigger is a comparator circuit with hysteresis implemented by applying positive feedback to the noninverting input of a comparator or differential amplifier. It is an active circuit that converts an analog input signal to a digital output signal. The VT-UK2-3X/VT11980A/U257 universal card requires ±15 Volts DC voltage input. The power draw of the card varies with the configuration but is less than 80 milliamps. The current at the output of the VT-UK2-3X/VT11980A/U257 is less than 5 milliamps. The permissible ambient temperature range is 0 to 50 degrees Celsius. The approximate weight of the VT-UK2-3X/VT11980A/U257 card is 0.1 kilograms.