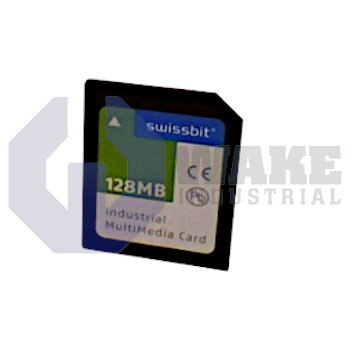 Warranty
1 Year Wake Industrial Warranty Included
Shipping
Worldwide shipping via DHL, UPS, and Fedex
Exchange
Call to find out about our exchange credit for your defective unit.
Sell Us Your Surplus
Have a PFM02.1-016-NN-NW to sell?
Click Here

The PFM02.1-016-NN-NW is a product of Bosch Rexroth Company. It falls under the IndraDrive MultiMediaCard series. It is inserted in a pre-existing slot on a corresponding device for seamless transmission of axis drive parameters without a PC. The duplication is made possible by the presence of an external plug-in.  The PFM02.1-016-NN-NW can be used as a permanent or temporary storage medium. However, it is paramount.

The MMC stores crucial data such as drive firmware, drive parameters, PLC programs, and user-side files. A permanent PFM02.1-016-NN-NW cannot be removed from the device and is mainly used for programming purposes. In essence, the non-volatile memory holds axis-specific parameter values and the firmware active in the device. A temporary PFM02.1-016-NN-NW can be plugged in and out of a device. As such, it is primarily used as a tool to update the firmware. It updates via command, transmits drive parameter sets, waves and loads the saved parameter sets. The Bosch Rexroth comes with a maximum storage capacity of 512kb which holds one file at a time.

The PFM02.1-016-NN-NW is not compatible on drives with modulo format and absolute value encoder. Before embarking on the firmware update journey, it is paramount that you save the initial parameter values of the axis on another storage device such as a hard disk. Once you’ve transferred them, switch off the running motor, unplug the MMC and insert it in a card reader. Then plug it in the PC and copy the new IBF firmware files. Note: you should discard the old ones since the PFM02.1-016-NN-NW can hold one file.

Why should you buy from us? Because we provide quality Bosch Rexroth MMCs in the market.