The CSB01.1C-SE-ENS-NNN-NN-S-NN-FW Servo Drive is manufactured by Rexroth Indramat Bosch. This servo drive has a SERCOS Master Communication, the Encoder Option 1 is IndraDyn/Hiperface/1Vpp/TTL and the Encoder Option 2 is Not an option. 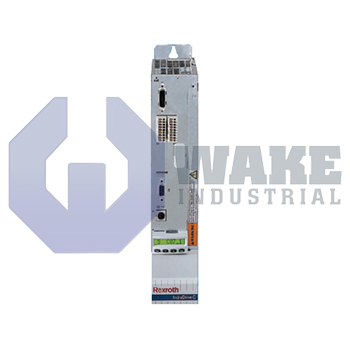 The CSB01.1C-SE-ENS-NNN-NN-S-NN-FW Servo Drive is manufactured by Rexroth Indramat Bosch. This servo drive has a SERCOS Master Communication, the Encoder Option 1 is IndraDyn/Hiperface/1Vpp/TTL and the Encoder Option 2 is Not an option.

Manufactured by Bosch Rexroth IndraDrive, this machine is referenced by the number CSB01.1C-SE-ENS-NNN-NN-S-NN-FW. It falls under the CSB series of drive controllers. Unlike most Bosch Rexroth drive controllers that come with two options – 1 and 2 – this one comes with only one option. It features Encoder IndraDyn /Hiperface/1 Vss/ TTL. The controller has a SERCOS Interface Master Communication. It also has a Without Safety Option and its Control Panel is Standard. The control panel is configurable according to your needs. As such the Bosch Rexroth CSB01.1C-SE-ENS-NNN-NN-S-NN-FW can be used in numerous automation projects.

This CBS series controller comes with numerous added advantages such as an advanced Drive-integrated technology that bolsters safety and a recent engineering framework that facilitates various planning steps. The IndraDyn encoder enables the controller to become compatible with other drive systems. The controller has versatility thanks to its compact design. As the company suggests, this CSB01.1C-SE-ENS-NNN-NN-S-NN-FW controller is universal and extremely cost effective. When purchasing this controller, it comes in three plates: control section, power section, and firmware plate section. This enables you to know which Bosch Rexroth controller you will need for your projects.

This controller features a configurable single-axis. Hiperface and IndraDyn combined have an 11.6 Volts supply. These features and many more make the CSB01.1C-SE-ENS-NNN-NN-S-NN-FW a top deck drive controller that can take your automation and industrial operations to the next level. Before installing this device ensure you go through the Bosch Rexroth documentation to avoid unforeseen injuries or potential system shutdowns. In case of repair, use repair parts from the manufacturer. This product can be purchased from Wake Industrial with a one-year warranty period.