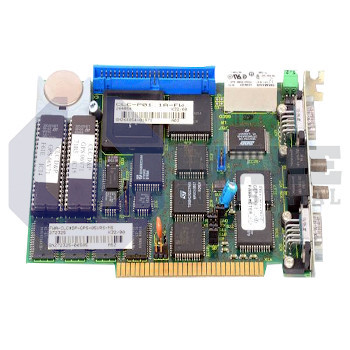 Warranty
1 Year Wake Industrial Warranty Included
Shipping
Worldwide shipping via DHL, UPS, and Fedex
Repairs
We offer repair service for the CLC-P01.1A-FW in 10 days
Sell Us Your Surplus
Have a CLC-P01.1A-FW to sell?
Click Here

CLC-P01.1A-FW is one of the many Motion Controllers designed and manufactured by Bosch Rexroth Indramat in the CLC-P Series which caters to the VME bus architecture. At first glance, you may not be able to notice these cards since they are installed inside the computer and are not marked. They are typically programmed based on the architecture of the IBM PC-AT bus.

The CLC-P01.1A-FW controls cards have four main ports which are labeled as X27, RX, TX, and X28. If you want to see the type of control these cards are meant for, the information would be seen below the port labeled X28. This control comes with battery on-board and when its charge goes down below 10% level, it will display a 206 message indicating the “battery low” message prompting for the need to replace it which should be done within a month in order not to risk losing data. However, unlike the other Indramat controls,  the CLC-P01.1A-FW has no hardware-based visible display and the diagnostic messages can be seen only on the main user consol.

CLC cards are an essential part of is part of motion control systems which includes SERCOS and digital servo drives. They provide a FiberOptic control and come in various form factors, to make them compatible with several different types of firmware and programs. They essentially multi-axis motion control (which can be coordinated or non-coordinated) with highly integrated input/output logic control functions. The fact that they cater to varying form factors, as well as special motion control functions, ensures that they find use in a variety of applications involving motion control equipment makes them highly flexible and effective. These applications may vary from simplistic general type of motion control to the highly sophisticated electronic line shafting (ELS) and thereon also to robotics.