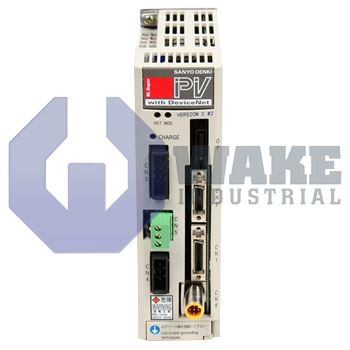 Warranty
1 Year Wake Industrial Warranty Included
Shipping
Worldwide shipping via DHL, UPS, and Fedex
Exchange
Call to find out about our exchange credit for your defective unit.
Sell Us Your Surplus
Have a PV2A015SM61P50 to sell?
Click Here

Sanyo Denki has been around for years. This company has a history full of experience and knowledge that only continues to grow. Unknown to many in the industrial automation industry, this company, Sanyo Denki, was founded and officially started in Japan. As the company grew, the company moved to Tokyo, and because of this large move and the impressive parts and pieces, this company made a huge impact in the world. Soon after moving, the company began growing at a rapid rate.

The company was tapping into many different sectors and was globally introduced. After producing servo systems, the company then shifted into more industrial automation products and focused on servo systems as it was introduced to both Europe and the United States. Now, after years of growing and making a name for itself, Sanyo Denki is doing wonderfully as an international servo system company.

The PV2A015SM61P50 is a servo amplifier part of the “PV” series. This family of servo amplifiers not only belongs to the “PV” series but also the “PV2” series which is less common than “PV2”. Numbers are very important to consider when searching, researching, or even thinking about purchasing a new product. In this case, the numbers broken down are as follows; 15 Amps and 200 Volts. The 15 Amps refers to the amplification capacity. While the number is not as large as other servo amplifiers in the “PV” series, it is still a great number to have. The 200 Volts refers to the voltage produced instead of a limitation to the amplifier capacity. Although numbers are something to consider, this is not the only feature or function that matters within the PV2A015SM61P50.