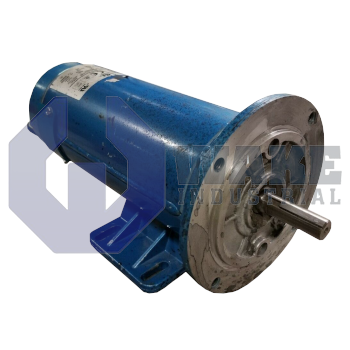 Warranty
1 Year Wake Industrial Warranty Included
Shipping
Worldwide shipping via DHL, UPS, and Fedex
Exchange
Call to find out about our exchange credit for your defective unit.
Sell Us Your Surplus
Have a BA3638-4588-9-56BC to sell?
Click Here

The BA3638-4588-9-56BC permanent magnet DC Motor series which over a diverse of benefits such as the speed control over a widely diverse range which is both below and above the rated speed. The most attractive feature of the BA3638-4588-9-56BC is the ability to offer high speed, which makes it suitable for applications such as paper and rolling mills.  It also has a high starting torque, which makes it convenient to use with traction applications that utilize heavy driving loads in starting applications. This motor is suitable for cranes and electric trains, which is a witness to the numerous experiences of Pacific Scientific motors.

The BA3638-4588-9-56BC motor relies on natural convection cooling mode, which makes it suitable to use readily available materials such as the fan, liquid, or APEX cooling. Therefore, you are guaranteed to have great convenience. This motor also adheres to globally acceptable standards such as adherence to 56C NEMA frame, and the current amperage of 39.8 laid out standards.  It also features a highly accurate and less speed torque, which is further contributed to the increased speed range.

The BA3638-4588-9-56BC also makes it possible to have a quick start, stop, reverse, and acceleration.  Pacific Scientific engineers have ensured they have availed a motion system that is highly productive.  It provides a high automation solution which makes a demand for high quality and high performance, and it ensures the specific need of the customers are met. The enhanced accuracy and improved operator safety make the motor have an endless capacity for innovation, and it is relentless in precision based on the high torque, position, and velocity which ensure that complex motion is very accurate. Pacific Scientific has ensured that it is a state-of-the-art servo motor that will meet your needs!