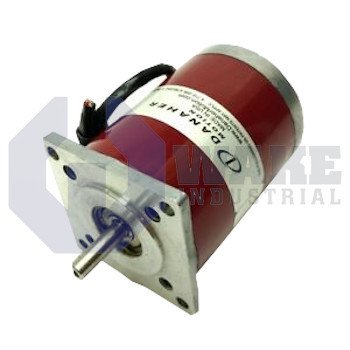 Warranty
1 Year Wake Industrial Warranty Included
Shipping
Worldwide shipping via DHL, UPS, and Fedex
Exchange
Call to find out about our exchange credit for your defective unit.
Sell Us Your Surplus
Have a E31NRLP-LSN-NS-02 to sell?
Click Here

E31NRLP-LSN-NS-02 is another high-quality variation on the king of stepper motor technology, Pacific Scientific’s signature Sigmax system. By utilizing rare earth magnet inserts, Sigmax works to produce the most torque and the highest power conversion possible. Combined with the laminated rotor of the E31NRLP-LSN-NS-02, Sigmax technology allows you to eliminate most losses caused by magnetic flux in a motor’s interior. Featuring a single stack design in a round 3.4 inch diameter housing with a 4 serial lead winding, the E31NRLP-LSN-NS-02 easily fills in common sets of industry specifications. Its brilliantly engineered P-type winding offers maximum torque output at high speeds, making this Pacific Scientific stepper a contender for even the most taxing of jobs.

Due to its serial lead configuration, the E31NRLP-LSN-NS-02 is capable of putting out a maximum 349 ounce-inches of torque at a rated current of only 4.2 amps DC. In addition to that, the E31NRLP-LSN-NS-02 offers the excellent holding torque for which the Sigmax technology is famed: 344 ounce-inches, coming from a motor that weighs only 3.2 pounds.

Finding yourself with a robotic project that you need to complete with torque to spare even at the high RPM range, while guaranteeing that your error margin is as small as they come for motors of this size, and that your machine will keep moving within a wide range of temperature conditions? Consider the Pacific Scientific E31NRLP-LSN-NS-02 specialty Sigmax-conventional hybrid stepper motor. Pacific Scientific has stood at the top of American automation technology for longer than the average citizen of the country has been alive, and its designs, like the E31NRLP-LSN-NS-02, remain the first choice in the industry to this day.