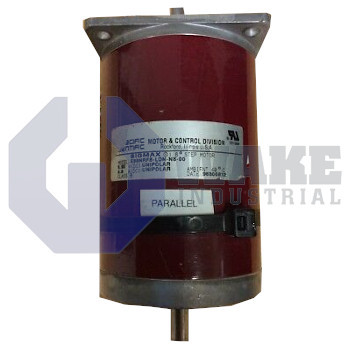 Warranty
1 Year Wake Industrial Warranty Included
Shipping
Worldwide shipping via DHL, UPS, and Fedex
Exchange
Call to find out about our exchange credit for your defective unit.
Sell Us Your Surplus
Have a E21NRHT-LDN-NS-00 to sell?
Click Here

E21NRHT-LDN-NS-00 edition E21-series stepper motors are a product of the Pacific Scientific corporation, who stood as industrial leaders for many years before joining the technological giant Kollmorgen corporation over 15 years ago. It is a testament to the quality and efficiency of this design that even to this day, the E21NRHT-LDN-NS-00 remains a highly competitive choice for common automation specifications. It features a 4-lead parallel configuration which offers maximum holding and operating torque and takes the highest rated current possible for this type of Pacific Scientific single rotor stack motor, 2.8 amps DC.

In addition to its lead configuration, the E21NRHT-LDN-NS-00 uses the T-type Pacific Scientific winding, which offers its peak torque output of 126 ounce-inches at the low end of its speed range. Patented Sigmax technology enhances the functionality of this conventional hybrid stepper motor to keep its torque range on the cutting edge of power delivery for a motor of its NEMA 23, or 2.3 inch diameter, frame size. It has the ever-popular laminated rotor type, which reduces the already low internal power loss of the motor.

The E21NRHT-LDN-NS-00 configuration hosts a double-sided smooth-type Pacific Scientific shaft which is carefully balanced and well-suited to both delicate, precise operations and rapid motion control. High holding and detent torque values prevent any slippage or accidental misalignment issues from occurring while your machines are both activated and deactivated, respectively. E21NRHT-LDN-NS-00 steppers operate within a tight error tolerance of a mere 1.5% of a 1.8 degree step, which equates to a maximum error of 0.027 degrees. To cause even that miniscule failure, however, would be a challenge with the durable technology and wide range of operational tolerances boasted by the E21NRHT-LDN-NS-00.