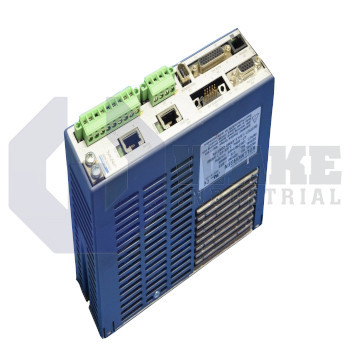 Warranty
1 Year Wake Industrial Warranty Included
Shipping
Worldwide shipping via DHL, UPS, and Fedex
Repairs
We offer repair service for the S20260-SRS in 10 days
Sell Us Your Surplus
Have a S20260-SRS to sell?
Click Here

Kollmorgen drives have revolutionized industrial motion control. Some Kollmorgen servo drives support SynqNet network, an upgraded version of the Ethernet network, is specially designed for high performance applications. The difference between the two networks is that SynqNet replaced the noise-prone analog Ethernet with a digital network designed along performance, reliability, and performance. Kollmorgen servo drives address the connectivity aspect by supporting a variety of industrial networks including, but not limited to, Ethernet/IP, EtherCAT, DeviceNet, CanOpen, and RS485. They also, support a wide range of feedback devices such as incremental encoders, absolute encoders, Hiperface, and EnDat.

Drives in this family conform to international directives for low voltage, electromagnetic compatibility, among others. Also, S200 servo drives feature standard torque or velocity control. However, some drives in this family, such as the S20260-SRS, have factory installed options that allow them to support SynqNet motion bus option card. For one second, the S20260-SRS has a peak output power rating of 1500 VA, 1400 VA, and 700 VA at 240 Volts AC 3 phase, 240 Volts AC single phase, and 120 Volts AC single phase respectively.