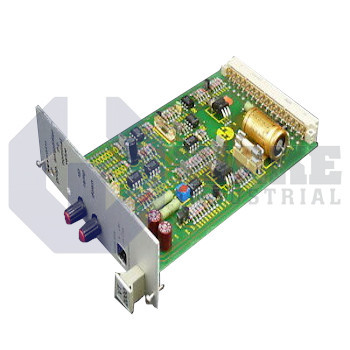 Warranty
1 Year Wake Industrial Warranty Included
Shipping
Worldwide shipping via DHL, UPS, and Fedex
Exchange
Call to find out about our exchange credit for your defective unit.
Sell Us Your Surplus
Have a VT 2000 S 46-2 to sell?
Click Here

The VT 2000 S 46-2 is the commercial product name of an electronic amplifier that is used for controlling the proportional pressure of a valve. These cards amplify the power of the card to activate the valves for a proportional controlling of the valve pressures. This valve pressure controller module has many features that make it one of the most popular proportional pressure controllers in the industry. It supports the up and down ramp times through ramp generator, which is incorporated into this card. It is also able to generate both 100 Hz and 200 Hz oscillation for the optimum performance of the valve pumps.

According to the commercial code or naming scheme, this electronic amplifier belongs to VT 2000 category of the products. The series of this product is referred to as VT 2000 4X series as denoted in the commercial code. The S in the commercial product code denotes the installation card design. This card is 32 pin plug-in interface card that sits perfectly in the Euro card holders or card magazines. The 46 in the product’s commercial code indicates the component series. The company manufactures a series of components for installation specification. All cards with component series 40 through 49 have same installation dimensions. The 2 in the product code indicates the frequency. The frequency of the VT 2000 S 46-2 amplifier card is 200 Hz.